800 homes rely on only one tap for their water 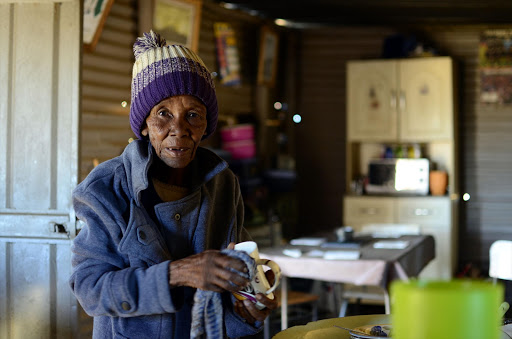 Maria Molelekeng washes dishes in her shack in Itekeng, a township at Biesiesvlei, North West. The community are protesting about their living conditions. / Tiro Ramatlhatse

Over 800 households in a tiny North West town share one tap to draw water and the majority have no toilets.

This is what spurred the community to embark on a violent protest on Friday that saw a municipal office torched.

Residents of Itekeng township in Biesiesvlei, 42km southwest of Lichtenburg, said they want the government to prioritise their area by giving them official stands in order to get service delivery.

They said they took to the streets after hearing about a road project coming to their area.

"Even in the next financial year, the issue of stands will not be addressed. The integrated development plan report states that R1.2-million was allocated to fence the gravesite, so it means we will still wait to get stands," he said.

Residents were angered by their living conditions which they claimed were yet to be improved. In Biesiesvlei, residents have dug pit toilets and travel about a kilometre to fetch water using wheelbarrows with 20-litre containers.

Residents said the municipality told them they would not get electricity, water or RDP houses because their shacks were overcrowded.

Maria Molelekeng, 72, said: "It's a disgrace for a woman as old as I am to go to the field when nature calls. I have been living here for 13 years and I am still struggling."

She said she was not encouraging the protest, but said it was necessary.

Gaetsewe Diselo, 59, said more than 10 shacks burnt down because they were using candles and paraffin stoves.

"We want government to act before we all die. Tomorrow I can wake up and hear that a shack is burning, we are used to that," Diselo said.

Task team chairman Sello Lehari promised residents the government would attend to their demands from next month.