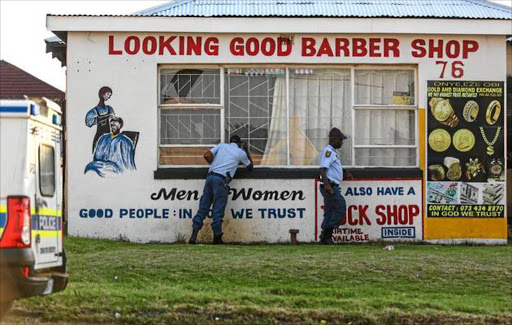 This is the house in Springs, east of Joburg, where a 42-year-old man and a teenager are alleged to have kept a group girls as sex slaves and fed them drugs. Picture Credit: MOELETSI MABE

The parents of four Mpumalanga minors rescued from the claws of sex slavery and drugs have told how their young girls were lured into a sex and drug den in Springs, east of Johannesburg.

The 40-year-old mother of a 14-year-old Siyathemba girl said her daughter and friends were playing outside when another 17-year-old friend asked them to accompany her to a bus stop.

"When they arrived at the bus stop an unknown car came and their friend asked them to get in," said the mother.

She was speaking outside the Springs Magistrate's Court yesterday where a 42-year-old Nigerian national and the 17 -year-old alleged accomplice appeared briefly yesterday.

The suspects will apply for bail on May 29, according to police spokesman Captain Thivhulawi Tshilate.

Another mother said the girls were sedated with drugs and made to watch pornography to mimic the sex acts.

The mother told Sowetan she had spoken to her daughter who revealed how they were forced to take drugs and record pornography while stoned.

"My daughter told me that she has done this before with the same man.

"She said at first she was not complying but she was told she would die [if she did not cooperate].

"This man has destroyed my daughter's future because she no longer focuses on her studies," the mother said.

Another mother said she was not aware that her only daughter was taking drugs but was disturbed by her frequent coughing.

"She started scratching her body and became impatient. And I suspected she might be taking drugs as I have seen [that kind of behaviour] on TV."

The four girls rescued are between 14 and 17 years old.

Another angry parent appeal led to the courts to impose life sentences on the alleged traffickers.

"My 16-year-old daughter dropped out of school in Grade 8 and gave her life to partying and booze.

"She is used to disappearing and never tells anybody of her whereabouts," said the mother.

A resident of the area where the girls were found on Friday said there had been lots of suspicious activities at the house.

"The house masquerades as a barber shop and a gold exchange shop. We have been seeing young women outside the house wearing mini-skirts and dresses loitering in the yard," said the man who did not want to be named.