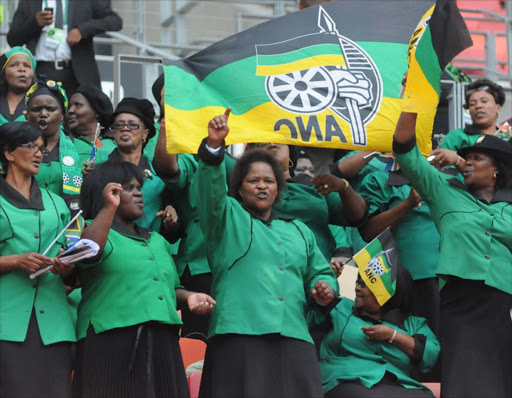 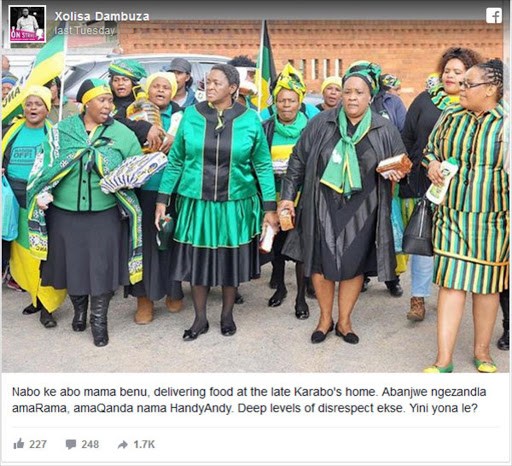 It is the most disgusting picture. A display of contempt for the dead, their family, relatives, friends - a blight on the history of past, morally upright leaders of the ANC Women's League.

Lillian Ngoyi, Albertina Sisulu, Ida Mntwana, Florence Matomela and Helen Joseph probably turned in their graves in revulsion at the behaviour of Bathabile Dlamini and her comrades.

A family was in mourning. The nation was in shock. Women were outraged and in fear. Out there, violent death and rape was stalking South African women. The country was crying out for some form of leadership, some words and acts of hope and courage, even from the beleaguered ANCWL.

And then they came, leaders of the ANCWL led by their inept and beleaguered president Dlamini. They were happy at another chance to hog the headlines.

Under the guise of paying their respects to suspected femicide victim Karabo Mokoena, they showed up at her home with groceries. Such is the kind and sympathetic act familiar in the African community to help a bereaved family with funeral costs and groceries.

But the ANCWL crossed a line: it violated one of society's unwritten rules, that a bereaved family is not only shown respect, but that those coming to share their pain and loss behave in a dignified manner.

But not the ANCWL of today. They arrived as if they were arriving at a wedding, openly and shamelessly showing off the groceries they were coming to donate to Karabo's family for all to see.

They did not even care to first pay their respects to the family and then discreetly hand over the groceries afterwards. No. This to them, the brutal death of a young, promising woman, appeared to be a perfect opportunity to show off.

In the uniform that was made a symbol of dignity and respect by Ngoyi, Sisulu and other past leaders who played the role of mother with distinction in the liberation movement, they sang, showing off the items of shopping. Can this ANCWL sink any lower than this?

Well, it appears, in fact, that this has become a culture among politicians, where funerals, even of people who had nothing to do with ANC politics while they were alive, are hijacked and turned into platforms to fight factional battles.

Just recently, speaker of parliament Baleka Mbete also engaged in this shameful act, hijacking the mass funeral of school children to talk cheap politics. How sad. What happened to the spirit of respect?

Such behaviour is perhaps a sign of the times, where those in positions of leadership have become so devoid of ideas and a sense of shame that they see nothing wrong, like opportunistic scavengers, to turn such tragic events into campaigning grounds.

Not only have they become morally bankrupt, the ANCWL has become a league only in name, a reactive organisation whose leadership has become opportunistic, publicity-seeking leeches who will do anything to hog the limelight.

They only bring out their uniforms when a high-profile case makes the headlines, to sing and pose for television and press cameras and make empty statements not followed up with action.

They have also become a useful tool in the factional battles that have rocked the ANC in recent times. Gone is the spirit of community activism cultivated by the generation of Ngoyi, Sisulu and many others; distinct community builders who never went for the glory of the headlines but worked diligently and quietly in communities, helping to empower and advance the struggle of women.

What a shame that the death of one so young could be turned into such a cheap spectacle by grown ups who are themselves parents? It really is the age of shame this.