Who sent the ‘get well soon’ card bomb to Durban family? 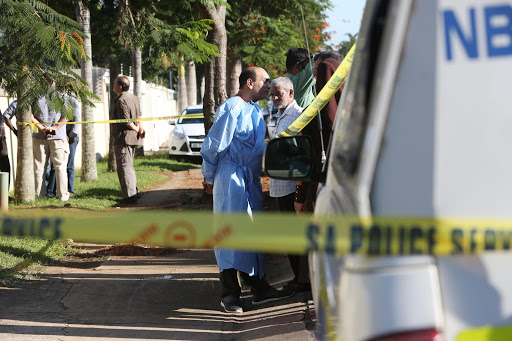 Police cordoned off the Durban house where a delivery of flowers and a card exploded. A member of the Kahn family, still in a hospital gown after helping the victims, was driving along the road when the bomb went off. Photo: Supplied

A team of explosive experts detonated the remnants of a parcel bomb that exploded in a plush Durban home on Friday afternoon.

It is understood that five people were injured — three members of the Khan family — after a parcel containing flowers and a card were delivered to the home around midday.

It is not known who sent the letter bomb or why.

A team of policemen cordoned off the upmarket Stephen Dlamini Road (formerly Essenwood) as curious neighbours gathered to find out what had unfolded at the Khan household.

A shaken Saleem Khan‚ an insurance broker who leased the house‚ said he had narrowly missed becoming a victim.

He had to rush his family members to hospital‚ one who is believed to be in a critical condition.

The house is owned by one of the directors of the Willowton Group of companies.