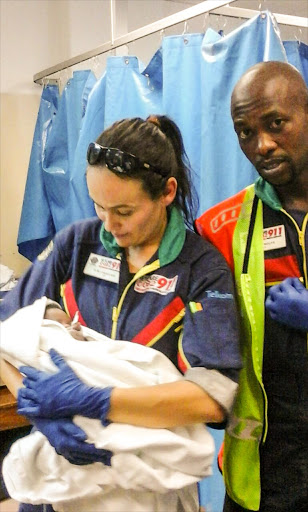 Netcare 911 paramedics Elmi Changuion and Walter Molife delivered baby 'Quantum' in a minibus taxi. The driver pulled over to the middle island on the M13 near Pinetown. Photos: Supplied

Their colleagues have nicknamed them the “obstetrics ambulance“‚ such is a paramedics team’s penchant for delivering babies.

Five months after they delivered a little one on a railway line in Shongweni‚ Netcare 911 paramedics Elmi Changuion and Walter Molife delivered a baby on Friday — this time in a minubus taxi on the M13 near the St Johns bridge on-ramp in Pinetown.

“The pregnant 31-year-old lady went into labour unexpectedly while commuting in the minibus taxi. The driver was made aware of the situation and he pulled over to the middle island‚”said Netcare 911 spokesman Nick Dollman.

“There was no time to move the mom to the ambulance and the minibus taxi was emptied to create space and privacy. The Netcare 911 team safely delivered the baby in the taxi before moving mom and her little girl to the ambulance‚” Dollman said.

The taxi’s passengers joked that the baby should be named “Quantum” after her birthplace.

“Quantum” and her mother were taken to hospital.