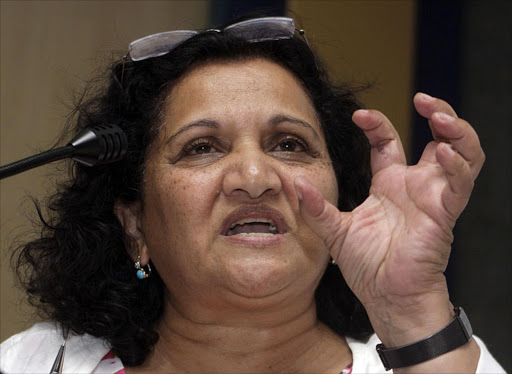 ANC deputy secretary general Jessie Duarte wants to give her input into a damning report on state capture released on Thursday.

The South African Council of Churches (SACC) on Thursday released the findings of its “unburdening panel”‚ which was established after allegations that former deputy finance minister Mcebisi Jonas had been offered a bribe by the Gupta family.

The report painted a disturbing picture of state entities that had been used to enrich a “powerful elite” close to President Jacob Zuma.

Duarte said she was not happy that her name was mentioned in the SACC report‚ even though she had not been given an opportunity to respond.

“I have tonight made a request to the panel of the SACC‚ whose report entitled Unburdened mentions my name in the context of the employment of my son-in-law by Minister van Rooyen‚” she said in a statement released on Thursday night.

“I was not invited to give my side of the events leading up to the appointment of Ian Whitley. I believe that the laws of natural justice require fairness in making a far-reaching conclusion‚ as this report does.

“Every South African committed to progress for our country will wish to have truth that is free of nuance and opinion. I hope that the SACC panel will accede to my request.”

SACC general secretary Bishop Malusi Mpumlwana said the council had received Duarte’s request and would take her concerns into account.

However‚ he said Duarte had not been accused of anything in the SACC’s report.

The report had simply pointed out that Duarte’s son-in-law was one of the advisors Des van Rooyen had brought with him when he was appointed as finance minister in 2015‚ he said.

“She was not accused of any wrongdoing‚” Mpumlwana said.