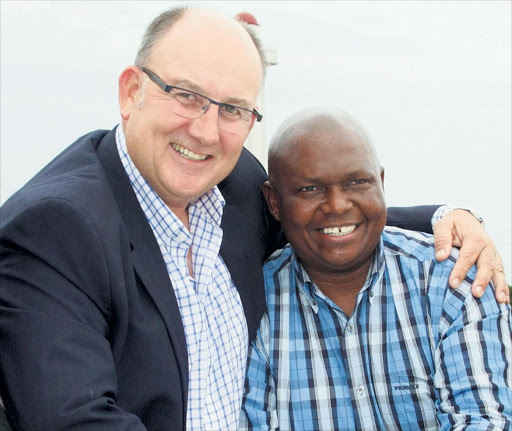 Athol Trollip of the DA, Mongameli Bobani of the UDM. Picture: Fredlin Adriaan

Nelson Mandela Bay deputy mayor Mongameli Bobani is no longer the mayoral committee member in charge of public health‚ and could soon be removed from his position as deputy mayor‚ if mayor Athol Trollip gets his way.

Speaking at a media conference on Tuesday night‚ Trollip said Bobani had constantly been at odds with the coalition partners since the coalition was formed in August‚ causing a “strained relationship” within local government.

“My intention is to ensure that this government is stable and able to deliver better services‚ stop corruption and grow the economy to create jobs. Councillor Bobani has done everything to prevent this from happening‚” Trollip said.

“We had given the UDM an ultimatum to replace or recall Councillor Bobani by midday today [Tuesday]. Failing which we would have no option but to replace him as the mayoral committee member for public health.”

He said Bobani would still hold his position as deputy mayor until a motion was brought before the council‚ where the majority vote would then determine if Bobani would be removed or not.

Trollip added that they are yet to receive feedback from Bobani about his removal from the mayoral committee.

Trollip added that he had received reports that DA leader Mmusi Maimane had received correspondence from Holomisa that his party had withdrawn from the coalition government.

This is‚ however‚ denied by Holomisa who said a national meeting with all coalition partners needed to be called to discuss the way forward.

“We are still part of the coalition government in Nelson Mandela Bay. We want a meeting with all the leaders of the different political parties to discuss this‚ as outlined in the coalition agreement‚” Holomisa said.