Its official: Durban to host tourism Indaba for next five years - says Zuma 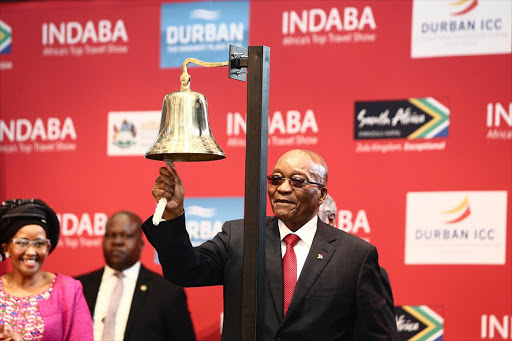 Durban will host the tourism Indaba for the next five years.

President Jacob Zuma made the anticipated announcement when he opened this year’s travel Indaba — one of the largest tourism marketing events on the African calendar — at Durban’s International Convention Centre on Tuesday.

The annual tourism trade show‚ which attracts more than 7‚000 delegates‚ showcases the widest variety of Southern Africa’s best tourism products and attracts international buyers and media from across the world.

Preceding the official opening‚ which started 90 minutes late‚ delegates were given a traditional Zulu kingdom welcome with entertainment by the KZN Brass band‚ African and Indian dancers and the Durban Gospel Choir Quartet.

He said the Tourism Indaba was a wonderful way to celebrate Africa month as the country showcases its beauty.

He welcomed delegates to the vibrant city of Durban and the country’s melting pot of cultures.

“Earlier this month we hosted delegates for the World Economic Forum which was another marketing opportunity for the African continent. This week we bring Africa and the world together.”

He said Africa was a wonderful and robust nation of diverse cultures and traditions.

Zuma said tourism was “riding a crest of a wave“.

“Tourism continues to reform and perform strongly and the future is positive. SA experienced a 13% increase in international visitors to Africa. We are happy with this growth because tourism has substantial potential of changing peoples lives for the better‚ especially during these economic times. Tourism also provides job creation and opportunities for entrepreneurship.”

He said Africa was growing at twice the rate of the global average.

“More and more global travellers are discovering our continent. They see its value as an exceptional destination for holiday and business. We are determined to move Africa forward in this business of tourism.”

Zuma said Africans must explore their continent and commended a South African travel blogger‚ Katchie Nzama‚ who is about to embark on her second journey across the continent.

Zuma announced a new national campaign‚ called We Do Tourism‚ which challenges every South African to do their part and contribute to tourism.

“With this campaigning people will appreciate the immense value of tourism in their lives. The total contribution of tourism to our economy in 2015 was about R375-billion. Tourism now supports about 1.5-million jobs. We want tourism to support over 2.2-million jobs by 2026. Our aim is to make South Africa one of the top 20 tourist destinations in the world.

“To achieve these goals we are strengthening existing markets while developing and investing in new international source markets such as the Middle East and Asia. Transformation will be another form of growth. Black entrepreneurs will be targeted to being the leaders in growing these markets.”

He said there were plans to have the fastest trains linking the capital cities of the continent‚ adding that there was a need for more aviation connectivity.