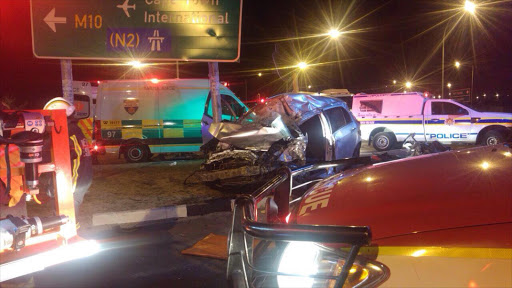 Two robbers died when a car and truck collided in dramatic circumstances in Cape Town on Tuesday morning PICTURE: ER24

Two suspected robbers were killed when their getaway vehicle collided with a truck in Bellville South‚ Cape Town‚ in the early hours of Tuesday morning.

A third robber‚ who didn’t make it into the car‚ was arrested.

According to a SAPS statement‚ at about 4.40am‚ the bizarre sequence of events started when Durbanville cops noticed a suspicious Toyota Yaris parked in Wellington Road and approached the vehicle to investigate. At the same time‚ they saw two men fleeing from a nearby liquor store.

“The driver of the Yaris made an attempt to knock [over] the police members‚ who were on foot at that stage‚ and sped off. One of the suspects who fled the scene of a burglary at the liquor store was arrested and detained‚ while the other one managed to evade an arrest‚” said Lieutenant-Colonel Andrè Traut.

As the two men in the car fled‚ with police about to give chase‚ they collided with a truck in Robert Sobukwe Road. Both men died in the crash‚ which left the road closed for several hours.

But‚ adding to the intrigue‚ police are also investigating the death of a security guard who was on duty at the liquor store.

Said Traut: “While the events transpired‚ a security officer‚ who was on duty at the building where the burglary occurred‚ entered the Durbanville police station to report the matter‚ where he collapsed and succumbed. The cause of his death is yet to be established.”

According to ER24’s Werner Vermaak‚ the one robber died instantly in the crash.

“The other was rescued by Metro Rescue and Fire Department (but) later succumbed to his injuries inside the ambulance‚” said Vermaak.

The truck driver was uninjured.

“The circumstances surrounding the burglary‚ attempted murder‚ the death of the security officer and the culpable homicide accident are under police investigation. The arrested suspect is due to make a court appearance in Bellville once he has been charged‚” said Traut.