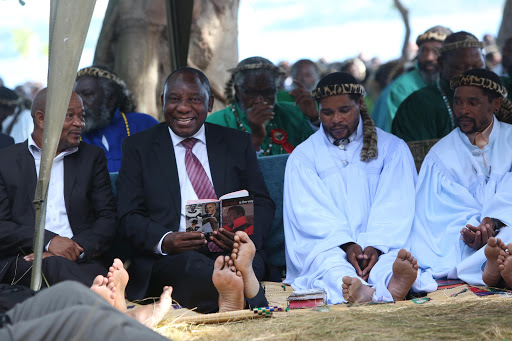 Deputy President Cyril Ramaphosa seated next to former KZN Prmier Senzo Mchunu and and Nkosi Biyela from the Shembe church at a Shembe service in Ezikhawini near Empangeni PIcture: JACKIE CLAUSEN

A security lapse in the protection of deputy president Cyril Ramaphosa — when he recently visited the Shembe church in KwaZulu-Natal — literally caught his bodyguards barefooted.

The lapse saw Ramaphosa — surrounded by a crowd of over 4‚000 worshippers — left with too few protectors and no proper escape route.

Police have refused to speak of the incident.

Some of the breaches saw Ramaphosa’s bodyguards having to remove their shoes as per Shembe custom‚ with his protection further compounded by there being only a single access road to eGibisile‚ the home of Nazareth Baptist Church Prophet Mduduzi Shembe‚ in eMpangeni.

These and other security lapses were brought to the attention of The Times by two senior police officers attached to the Presidential Protection Unit in Durban.

They claim Ramaphosa’s visit was not properly co-ordinated both organisationally within the ANC‚ or on the security front.

“In short‚ we were outnumbered if anything happened. We weren’t prepared for any eventuality as this came to our attention at short notice‚” said one of the officers.

“Apart from the bodyguards‚ many of whom were barefoot‚ we only had four Takkies [Special Task Force] guys in a military Land Rover‚ a handful of SAPS which would not have helped. There were over 4‚000 people in a place where there was only single exit route.”

His colleague said if something had gone wrong their jobs would have been on the line.

He said this lack of preparedness on that day exposed the state to many risks as no proper intelligence and due diligence was undertaken before the visit.

Police spokeswoman Major-General Sally de Beer said they did not discuss security matters as “this could well compromise the security of our principals“.

“The SAPS does‚ however‚ refute that security was compromised in this instance.”

Ramaphosa’s security issue comes as he is embroiled in a spat with the KwaZulu-Natal ANC after he visited and addressed two places‚ including the Shembe church‚ without informing or being accompanied by members of the the provincial executive committee.