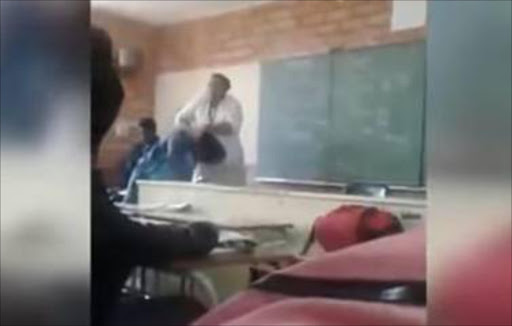 A Lenasia South Secondary School teacher has been filmed slapping a child who allegedly disrupted class.

Following an enquiry from TMG digital‚ the department has confirmed the teacher will now face a disciplinary process.

“We condemn any form of assault of learners in schools as corporal punishment is outlawed by the constitution of the country‚” said Gauteng education department spokesman Steve Mabona.

“The department can confirm that it will be conducting a disciplinary hearing against the educator. The date still needs to be confirmed‚” he said upon further inquiry.

A video of the incident has been shared on Facebook and shows the teacher hitting the pupil before forcibly ejecting him from the classroom.

The incident is said to have happened on Monday at the Johannesburg school.

In the footage‚ the teacher can be heard shouting at the pupil‚ demanding that he hand over his cell phone.

The unidentified pupil is then manhandled by the teacher while the rest of the class watches.

The teacher is seen dragging the learner out of the classroom.

In response to questions from TMG digital‚ Mabona initially said both parties apologised “and the matter was resolved.”

He later confirmed the disciplinary action.

“The department is aware of the incident in relation to the video which shows a teacher hitting a child at Lenasia South Secondary School after the learner refused the educator to hand over his phone in class disturbing teaching and learning‚” he said.

The department said it “strongly condemns this behaviour and would like to urge all our learners to refrain from acts of misconduct in schools”.

“We also urge parents to assist the department in instilling learner discipline in and outside the school environment. We will act swiftly on all misconduct cases involving learners and educators as they are reported to the department‚” Mabona said.

TMG digital understands that some pupils at the school are planning a protest against the teacher.