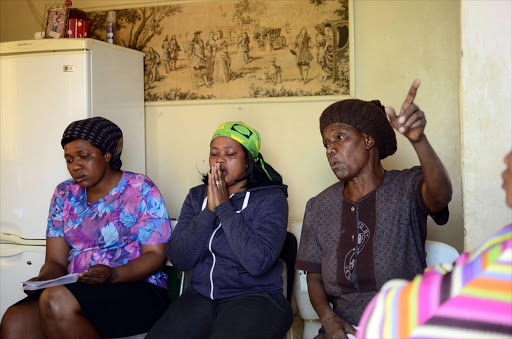 Dipuo Mosweu, Kopano Leteane's mother Ouma Mosweu and Martha Mosweu speaking to the Sowetan at their home in Coligny. Kopano Leteane is one of the victims who went missing and later found dead at a farm in Rietvlei last year match. Photo: Tiro Ramatlhatse

Three families say their loved ones died at the hands of white farmers in Coligny, North West, and police allegedly failed to investigate the cases.

They said the recent violent protests brought back memories of the deaths of their relatives who were never found.

There was chaos in Coligny after Matlhomola Mosweu , 16, died on April 20 after he was allegedly attacked for stealing sunflower seeds from a local farm.

Residents went on a rampage after they accused the police of dragging their feet in arresting the alleged killers. They accused authorities of being reluctant to investigate cases against white people in the area.

Mosweu's death reminded the family of how Thapelo Diphae, 24, was found dead on a farm in Coligny on November 22, 2013.

He had gone missing for three weeks before his badly decomposed body was found floating in a dam at the farm. Diphae's sister Pinky said his body was badly decomposed and had dried blood at the back of his head when they found him.

"I cry every time when I remember how he died. He was decomposed and green in colour, one of his eyes was missing," she said.

Pinky said all they wanted was for the police to give them postmortem results and investigate the circumstances surrounding his death.

The farm's owner was not arrested or taken in for questioning, according to Pinky.

Diphae's death certificate, showed that the cause of death was "undetermined".

Another family, that of Kopano Leteane, 18, said his body was found on March 11 2016 on a farm after he had gone missing for seven days. His family said they reported him missing to the police after he disappeared on March 4 but were not helped.

"We then asked community members to go around the farms and township in search of Kopano," his mother Ouma Mosweu said. The family is related to Matlhomola.

After six days of searching, she said they received a phone call from the police about a body that had been found on a farm. His body was also badly decomposed.

"We only recognised him by the clothes he was wearing," Mosweu said.

Similar to Diphae's case, Mosweu said the farm owner had reported to the police that there was a corpse on his farm.

"We had gone to the farmer and showed him a picture of my son and he said he had not seen him, but a day later the police came to my house and told me the same farmer had found my son's body in his property."

She said they tried opening a case with the police but had never been given a case number or heard anything from them. Leteane's death certificate also states that the cause of demise was "undetermined".

The third family is that of Delekile Batyi, 32, who was knocked down by a car driven by a white woman in February 2016. His sister Nozilelo Batyi said even though the woman stopped and called the police, no case was opened or investigated. "We are blacks and if a case is against a white person, they don't even listen to you."

Police spokesman Brigadier Sabata Mokgwabone could not confirm the alleged cases. "We will first have to look at those cases and check if they were opened," he said.

He promised to give a response today.

Meanwhile, public safety MEC Mpho Motlhabane met residents yesterday and pleaded with them to allow children to go to school.