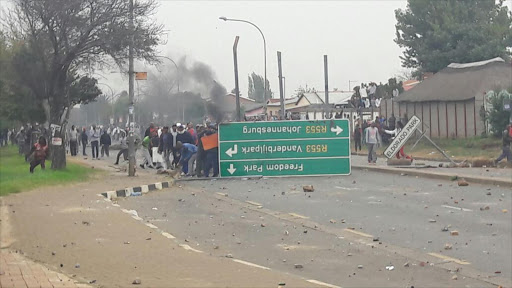 Police have confirmed that more than 50 people have been arrested since Monday in Eldorado Park in the south of Johannesburg which has been wracked by protests.

“We are still deploying members in the area because the situation is a bit tense so we are trying to disperse the crowd from gathering‚” said Gauteng police spokesman Lungelo Dlamini.

Asked how many members of SAPS are deployed in the area‚ Dlamini said he could not divulge operational information to the media.

The suspects will appear in the Lenasia Magistrate’s Court this week.

The local community policing forum which has been trying to calm the situation down since Monday‚ is worried about the destruction of property and the looting of the very same stores that they buy from.

“As community leaders we have had enough of what’s been happening. Between yesterday and today‚ the situation has become out of control and chaotic and we know that now we are just dealing with a criminal element‚” said Cheryl Pillay‚ chairperson of the Eldorado Park Local Drug Action Committee.

“The looting has escalated to a point where us as the community we have to stand together to try and protect each other’s property‚” she said.

Pillay said they wanted the government to urgently address the community issues because it was clear that they would not back down.

Community members are demanding land to build houses and want government’s intervention as soon as possible.

On Monday‚ local Spar shops in extension two and extension eight were looted. A Pep store as well as a Shoprite store in Freedom Park were also looted by protesters.