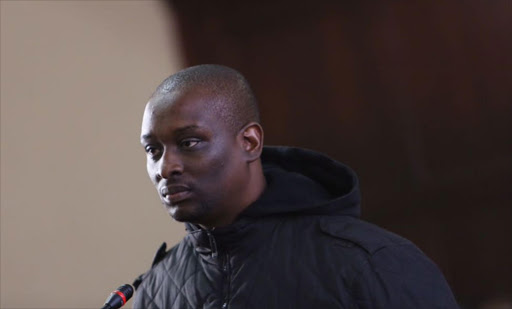 Elvis Ramosebudi, a man who allegedly plotted to assassinate officials perceived as state capture beneficiaries made his first appearance in the Johannesburg Magistrate’s Court today. PHOTOGRAPH : ALON SKUY/ THE TIMES

The man accused of planning to kill senior government officials was granted bail of R3‚000 on Monday in the Johannesburg Magistrate’s Court.

Elvis Ramosebudi is accused of approaching wealthy individuals for funding as part of a plan to assassinate President Jacob Zuma and several other government ministers and officials.

It was also alleged that he planned to assassinate Zimbabwe President Robert Mugabe.

The alleged assassination plans were in documents police found in Ramosebudi’s home in Soshanguve‚ near Pretoria.

In opposing Ramosebudi’s bail application‚ the state provided some insight into the evidence against him.

The Hawks had arrested Ramosebudi for allegedly plotting a coup‚ but last week the state changed the charges from conspiracy to commit murder to incitement to commit murder.

On Friday‚ prosecutor Johann Badenhorst detailed the state’s case against Ramosebudi by reading out an affidavit by investigating officer Captain MF Sewele.

“The first three targets to be neutralised will be David Mahlobo‚ then Ace Magashule then Mosebenzi Zwane‚” according to Sewele’s affidavit.

“These confiscated documents still need to be investigated. These documents included further assassination plots against the president of Zimbabwe ...”

Badenhorst said the state opposed bail because “there is a likelihood that‚ if released on bail‚ [he] could endanger people.”

He said Ramosebudi had written letters to Anglo American and to businessman Atul Gupta‚ whose family has close links to President Jacob Zuma.

Badenhorst told the court that the police were not sure whether Ramosebudi’s letters were a hoax.

Sewele said in his affidavit that a policeman‚ acting undercover‚ pretended to be interested in helping Ramosebudi and met him on April 26. The meeting was secretly recorded and filmed.

Ramosebudi allegedly told the undercover officer he wanted to use food poisoning and a sniper rifle to assassinate people. He allegedly said he knew where the people on his lists lived and what their movements were. The killings were allegedly to be made to look like robberies.

Ramosebudi confirmed to the undercover policeman that he had written the letters‚ Sewele’s affidavit said.

He also allegedly said that if these people were not assassinated‚ there would be a civil war if the ANC loses the elections in 2019.

According to Sewele’s affidavit‚ Ramosebudi took investigators to his shack‚ where they found documents showing he planned to assassinate Mugabe.

Through an affidavit read in court by his lawyer‚ Motebang Ramaili‚ Ramosebudi said he has a girlfriend and seven-year-old daughter. He also agreed not to interfere with the case if released on bail.