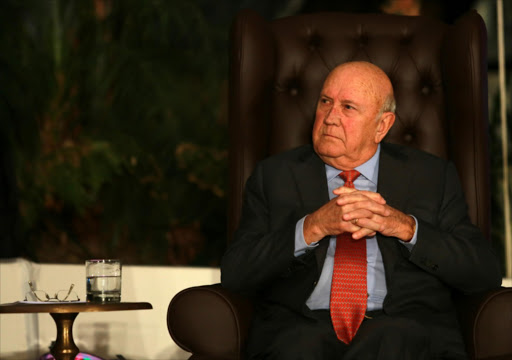 About 50 members of the Economic Freedom Fighters (EFF) arrived at the launch of the National Foundations Dialogue Initiative in Braamfontein to protest against the presence of former president FW de Klerk‚ who left within minutes of their arrival.

They have joined forces to hold a series of national dialogues to address current threats to South Africa’s democracy. Their foundations‚ plus the Ahmed Kathrada‚ Helen Suzman and Nelson Mandela foundations‚ have also joined the dialogue.

Musa Novela‚ EFF leader in Johannseburg‚ said the party had arrived at the event to bring a clear message that they did not welcome De Klerk.

“We cannot have a national dialogue on a way forward more especially with somebody like De Klerk‚ who is a murderer‚ who has killed our people. He cannot be here and tell us how to take the country forward. He shouldn’t be part of this arrangement. He is a murderer‚” Novela said.

He said the EFF was not going to disrupt the dialogue.

“But it should be having the correct panellists‚ those who have the interest of the people and country at heart. De Klerk is not one of those people. He shouldn’t be part of that panel in the first place‚” he concluded.

The group staged a silent protest at the conference venue during the lunch break. Members carried placards saying “De Klerk should be charged with genocide against blacks“.

The party also issued a statement rejecting the initiative‚ arguing that the gathering was repetition of the talks that ushered in a democratic South Africa.

The EFF members did not participate in the 10 breakaway groups to determine the issues and challenges facing the country. They instead remained in the main conference hall.