United in grief: pupils who perished in horror accident remembered 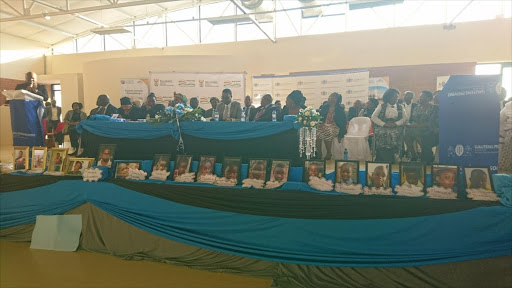 Pictures of the 18 victims of the Verana crash on stage at their memorial in Sokhulumi community hall in Verena Picture: Boikhutso Ntsoko

United in grief‚ primary and secondary school pupils in their uniforms have packed the Sokhulumi community hall to remember eighteen of their peers and two adults who died in a horror minibus accident in Verena near Bronkhorstspruit just over a week ago.

School choirs on Wednesday took turns paying tribute to their peers in song‚ with one school poignantly rendering “Lalani ngoxolo‚ bangani bethu‚ sizonikhumbula” (Rest in peace our friends‚ we will remember you).

Heartbreaking sobs from inconsolable bereaved families could be heard amid speeches and songs.

Community members‚ government officials and parents also came out in numbers for the memorial service ahead of the mass funeral to be held over the weekend.

Fanie Botes‚ principal of Hoerskool Erasmus‚ said the tragedy has affected all the schools‚ staff and learners as they were all involved in learner transport.

He said when he heard of the accident he thought of his own learners who travel from Verena and Brokhorstpruit on the same R25 road daily.

“I was concerned some of my learners could be involved. Though it was not some of my learners‚ it is hurting the same because these are our children. When you look at their faces‚ especially their eyes‚ you realise the magnitude of this loss of great potential‚” he said.

The group died when the minibus they were travelling in crashed into a truck and burst into flames on April 21‚ leaving almost all of them burnt beyond recognition. Forensic experts finalised the process of identification on Monday.

Representative of local chief‚ Prince George Mahlangu‚ said the road on which the accident happened linked Gauteng and Mpumalanga but was in terrible condition.

He pleaded with authorities to fix the road as a matter of urgency in remembrance of the young lives that had been lost.

“We know how bad that road is‚ everyone who has travelled on it would attest to its condition. We plead with government to fix the road as a memory to the deceased. We have never had a tragedy of this magnitude in Sokhulumi. We are inconsolable with grief. There is nothing as painful as losing a child‚” he said.

The driver of the minibus was buried in Wolvenkop last Saturday.

A total of 20 people were killed in the crash. Seven were injured. Three of them remain in hospital while four have since been discharged.