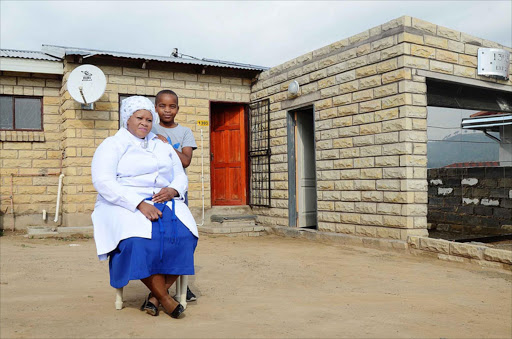 Andries Tatane's wife Rose Tatane with their son outside her new house that was donated. PHOTO: Mduduzi Ndzingi

The wife of the slain Free State community activist Andries Tatane has died.

Rose Tatane, 33, perished in a car crash in Lesotho on Monday night while travelling with her driver.

Her older brother, Lebohang Mohlaping, said the driver lost control of his Toyota Hilux bakkie in Bela-Bela and the car veered off the road and plunged into a crop farm around 7pm. The two occupants died on the scene.

It was not clear what Tatane was doing in Lesotho, but her family said the driver had relatives there. The man also helped Tatane to fetch water across the border in Lesotho, as Sowetan reported on April 13.

"We tried to call her around 9pm and a policeman answered her phone. He told us about the accident and that people had died. We are still traumatised as a family. We are awaiting the postmortem results before we can start making funeral arrangements," Mohlaping said.

Rose's husband, Andries, was killed in a hail of police bullets during a service delivery protest in Ficksburg in 2011. The incident, which was caught by TV cameras, raised a lots of questions about police brutality.

Letlotlo Ranyathole, Andries' friend and fellow activist, said Rose's death was a big setback to the fight to keep her husband's legacy alive.

"In the last discussions I had with her she had indicated how she would help not to let Andries' legacy fade away. She was a very crucial part of the foundation that we are in the process of setting up for Andries. Our main concern now is how their son Molefe, 10, will cope," Ranyathole said.

During Sowetan's visit, ahead of her husband's sixth year commemoration, Rose expressed anger that her husband's death was in vain as their community experienced water shortages.

"I'm very angry that six years after my husband was killed by police for fighting for service delivery, I'm still subjected to lack of water. Every now and then I have to pay money to get my buckets across [the Caledon River] to Maputsoe for water."

She was working as a cleaner at the town's municipal offices at the time of her death.