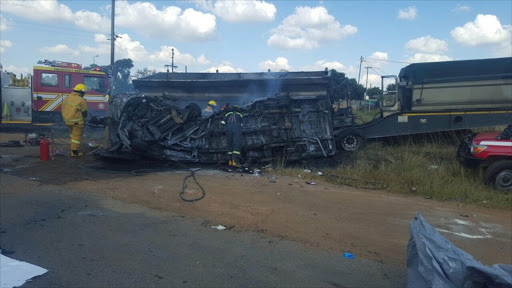 DNA testing is still underway to identify all of the victims of a horrific minibus taxi crash that killed 18 learners and their driver on April 21 in Mpumalanga.

Department of Basic Education spokesman Elijah Mhlanga said the results would be finalised‚ at the earliest‚ by Friday.

“We’re a long way before we can talk about the funerals of these children‚” he said.

However‚ the doctors continue to work “day and night” to try to finish everything‚ said Mhlanga.

The delay is a result of the technical nature of the testing. After every family submits a sample‚ the sample has to go through a process of elimination before a match is established‚ said Mhlanga.

“It has to be accurate and it has to be painstakingly thorough‚” he said.

Of the seven students taken to hospital immediately after the crash‚ three were discharged on Friday and the rest are expected to be released this week.

However‚ at least two families have declined to take part in the government-sponsored funeral arrangements‚ preferring to hold their own services.

The funeral for the driver was held in Wolvenkop at the weekend.

Several prominent officials were in attendance‚ including the Gauteng MEC for Education Panyaza Lesufi and Mpumalanga MEC for Community Safety‚ Security and Liaison Pat Ngomane.

Executive Council Members from both Mpumalanga and Guateng were also present.