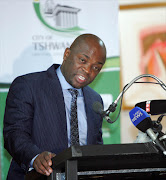 Mayor Solly Msimanga has accused Ngobeni of failing to execute his duties during a scuffle in the council chambers earlier this month when ANC councillors disrupted the state of the capital address.

Tshwane metro police and the South African Police Service entered the council hall twice to ask ANC councillors to leave the venue‚ but the councillors refused. The heated skirmishes continued‚ with other councillors joining in the fight.

The disruptions prevented Msimanga from delivering his state of the capital address for about five hours. When ANC councillors refused to leave the sitting‚ Speaker Katlego Mathebe adjourned it. Msimanga addressed guests from another room.

“The council will consider the actions by the police chief [that took place] on the 6th of April in which the executive mayor‚ in consultation with the city manager (Moeketsi Mosola) of Tshwane‚ withdrew the sub-delegation of Steven Ngobeni’s powers and functions for the duration of the state of the capital address‚” said the mayor’s spokesman Samkelo Mgobozi.

“These powers were then reinstated the following day and he is currently the police chief.”

Speaking to TMG Digital earlier this month‚ Ngobeni rubbished claims that he had failed to act against the unruly ANC councillors.

“I got a report that there was a bus outside that had Cosas (Congress of South African Students) who wanted to force themselves inside the council chamber premises. I then left the gallery whilst they were debating the issue of the removal of councillors to apprehend Cosas because my responsibility is the security outside the perimeter of the chamber‚” said Ngobeni.

“Before I arrived there‚ I received a call from the city manager‚ saying ‘I want you here’ and when I got to him‚ I was told that I was suspended and I didn’t argue with him‚ I said‚ ‘Thank you very much’ and I left‚” he added.