Ntlemeza may be right to insist on returning to work 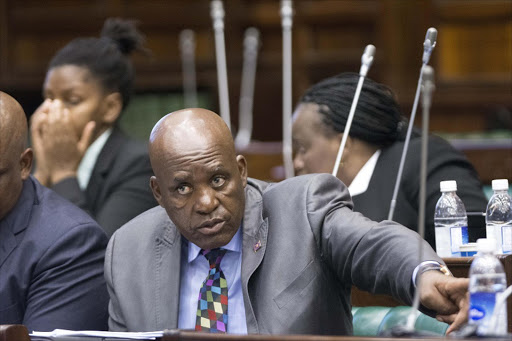 Berning Ntlemeza‚ who has been instructed by Police Minister Fikile Mbalula not to report for duty as head of the Hawks‚ might be correct in insisting on doing so.

In March‚ the high court in Pretoria reviewed and set aside Ntlemeza’s appointment as head of the Hawks.

The judgment followed a high court judgment in 2015 where the court held that Ntlemeza lacked integrity and honour and had made false statements under oath.

On April 12‚ the newly appointed minister Mbalula withdrew his application for leave to appeal against the March judgment.

During the same hearing in Pretoria‚ the Helen Suzman Foundation and Freedom under Law sought an enforcement and execution of the March order‚ despite pending appeals.

The court granted their application.

Mbalula relies on the judgments of the high court in March and April and insists Ntlemeza should not report for duty.

However‚ Ntlemeza on Friday petitioned the Supreme Court of Appeal (SCA) against the orders of the high court.

His view is based on the Superior Courts Act‚ which states that if a court grants an execution of its earlier order‚ it should immediately furnish reasons for doing so.

Section 18(4)(ii) of the Act also states that the aggrieved party has an automatic right of appeal to the next highest court.

The Act states that such execution order should be suspended‚ pending the outcome of the appeal.

Ntlemeza’s lawyer‚ Comfort Ngidi‚ referred to a judgment in the Supreme Court of Appeal in November last year which‚ for the first time‚ dealt with an automatic right of appeal under Section 18(4)(ii).

The University of Free State was appealing against the judgment of the Free State High Court‚ which directed that its judgment and order delivered on 21 July 2016 not be suspended pending the determination of an appeal by the UFS to the Constitutional Court‚ alternatively to the SCA.

The court held that the applicant for the execution order had to prove the existence of “exceptional circumstances” and show that the other party will not suffer irreparable harm.

The SCA upheld the university’s appeal. The appeal court found that Afriforum had not shown that exceptional circumstances existed for the implementation order.