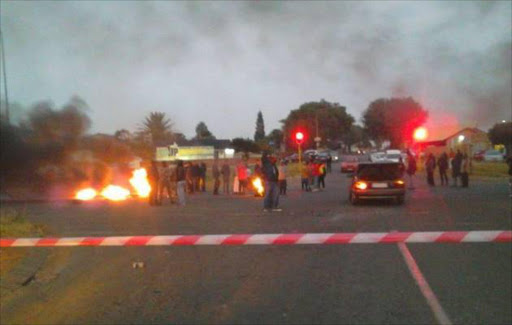 The protest on Tuesday morning was aimed at people claimed to have occupied land illegally. File photo Image by: Radio Islam‏ via Twitter

Residents have burnt tyres and blocked the K43 road in Lenasia in the south of Johannesburg‚ metro police said on Tuesday.

The protest on Tuesday morning was aimed at people residents claim to have occupied land illegally.

“There is a strike under way due to what residents call illegal land occupation‚ between Main Road and Ennerdale. The situation is tense at the moment‚” said metro police chief Wayne Minnaar.

Minnaar said residents had burnt tyres and placed rocks in the road overnight.

The police are on the scene to try and curb violence.

Minnaar said residents had claimed that a group of people had settled on a piece of land in Extension Two of Lenasia‚ which has been left unoccupied for several years.

Minnaar urged motorists to avoid the area as it is not safe.