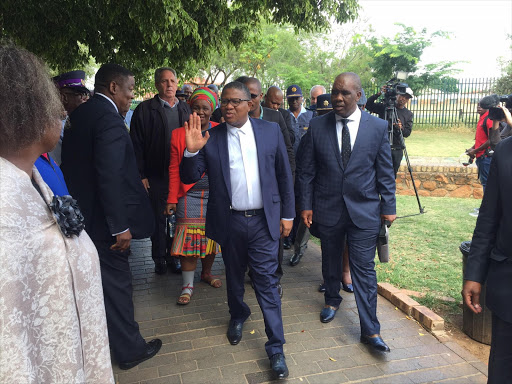 Mbalula arrived at the Soshanguve Police Station on Sunday along with the SAPS chief of staff, Steve Tshabalala ahead of the briefing with regards to an incident involving the killing and wounding a police officer on Friday. Picture: Neo Goba

Police minister Fikile Mbalula has warned police officers still loyal to General Berning Ntlemeza that they are “doing illegal operations” if they still obey his orders.

The new police minister was speaking at the SAPS training academy in Pretoria on Tuesday following his first 25 days in office.

Mbalula said he was aware of “rogue elements” within the police who were still loyal to Ntlemeza and who were undertaking operations he considered illegal.

A recent court order declared Ntlemeza’s appointment as head of the Hawks illegal‚ and Mbalula has demanded he vacate his office immediately.

“I am aware about their operations working in safe houses to undertake operations against the minister of police‚” he said.

“I am aware of them and I am coming for them‚” Mbalula said.

He warned that the illegality in the country must come to an end.

“We don’t allow rogue police officers using state resources to undermine the state. We can’t allow that‚” he said.

“Those illegal operations you are undertaking in safe houses‚ those safe houses must chase criminals and not chase law abiding citizens. I am not going to allow that‚” he said.

“You must chase criminals. I want criminals behind the door (in jail). You are working 24 hours to do an illegal operation‚ we are not going to allow that.

“The law is protecting me and I am going to unleash the law to ensure that I achieve the mission to deal with rogue elements masquerading as intelligence officers‚ doing rogue things in this country‚” he said.

Mbalula fired warning shots at those he deemed to be “rogue elements” saying he was coming after them with the full might of the law behind him.

He warned “there is a new sheriff in town” and that he was there to uphold the law.

Mbalula also hit out at Ntlemeza personally for a second day running.

On Monday Mbalula demanded the controversial policeman immediately return a state-owned car and cellphone‚ saying Ntlemeza may not enter his Hawks office.

On Tuesday Mbalula said: “In terms of the car‚ before I left yesterday it was returned at the Hawks office… which is state property. I am not aware that he has a cellphone. Whatever is in his possession by law‚ by yesterday it should’ve been returned‚” he said.

Mbalula said he wasn’t “at war” with anybody‚ but fired warning shots at Ntlemeza.

“If General Ntlemeza‚ let me make that clear‚ is not going to return state property peacefully‚ we will retrieve it forcefully by law from him. If it means I must send the task force or the intervention unit because he is armed and dangerous‚ I will do it‚ because the law permits me to do it‚” he said.

Meanwhile Ntlemeza has issued his own warnings to Mbalula‚ via his attorney Comfort Ngidi.

“We have finalised papers to force the minister to retract what he is saying. What he is doing is unlawful‚” Ntlemeza’s attorney Comfort Ngidi said on Tuesday morning.

“As an employee‚ you are not obliged to obey an unlawful instruction from the minister‚” Ngidi said.

Ngidi said Ntlemeza had a right to return to work as he had petitioned the Supreme Court of Appeal on Friday.

He said Ntlemeza relied on the Superior Courts Act‚ which gives him the right of an automatic appeal to the next highest court in light of the execution order.

The Act states that the aggrieved party has an automatic right of appeal to the next highest court.

It also states that an execution order should be suspended‚ pending the outcome of such an appeal.