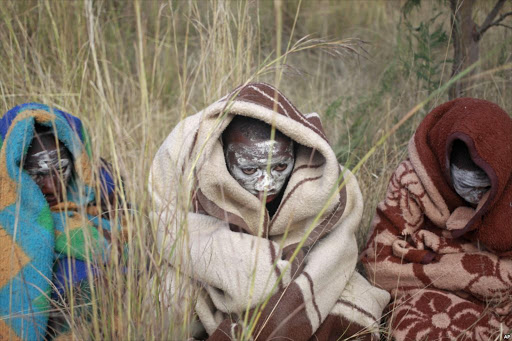 Thousands of boys in the former KwaNdebele homeland have begun their two-month seclusion to undergo Ingoma (initiation)‚ a sacred rite of passage that has in the past been marred by fatalities.

Concerned parents have pinned their hopes for the well-being and safe return of their children on the intervention of a group called the Ingoma Forum‚ a group of medical doctors and health practitioners who have gone through the rite of passage.

The deaths in the last initiation season of 2013‚ which sent shockwaves around the country‚ occurred in the Nkangala district villages of Siyabuswa‚ KwaMhlanga‚ Verena‚ Kwaggafontein‚ Middelburg‚ Bethal and Evander.

Thirty-one youngsters perished due to negligence and botched circumcisions. Most deaths were related to preventable complications‚ such as excessive bleeding and exposure to extremely cold conditions.

Mpumalanga department of health’s Musa Thugwana‚ who also chairs the Ingoma Forum‚ said the key to intervention was to ensure that every initiate goes for medical assessment prior to the initiation and that parents have consented and filled out forms to state any medical conditions that their children have.

Thugwana said it was important that those who had health conditions continue to receive their medication while in the mountains and that all are monitored for any signs of health complications.

“Our intervention means we inspect the kraals for any signs of trouble‚ working together with parents and traditional leaders. The fact that we are also graduates of these initiation schools helps in that the sanctity and dignity of the ritual is preserved‚” Thugwana said.

Thugwana admitted that the 2013 deaths occurred under their watch but said the situation could have been much worse if it were not for their intervention.

“As I said‚ the element of negligence is a problem and we could not get to some of the victims in time to save them. Some had already died when we arrived‚” he said.

Sana Mahlangu‚ of Matjhirini village near Siyabusa‚ whose 16-year-old son is among the initiates‚ said it was important that families work with the forum if they wanted their children to return alive.

He said no parent wants to lose a child in the name of tradition and it was clear that the conventional way of doing things was failing.

“We know where the problem is and we have been offered a workable solution to save our tradition. Let us work with them‚” he said.

He said at first he was against the forum but when its role was explained‚ he agreed to it.

“We went through the passage and we know how easy it is to die there. You find someone with epilepsy. When they have a fit‚ they are assaulted‚ instead of being given medical attention. That must end‚” Mahlangu said.

Prince Madolo Mahlangu‚ of Ndzundza-Mabhoko Traditional Council‚ said he appreciated the intervention of the Ingoma Forum and had no doubt that it will curb deaths.

He said some people were initially against the forum‚ but they changed their minds once they realised the importance of the initiative.

“The problem is people thought government has put together a group of people who have not undergone the practice themselves and therefore feared that the dignity of the rite‚ which is shrouded in secrecy‚ would be undermined‚” he said.