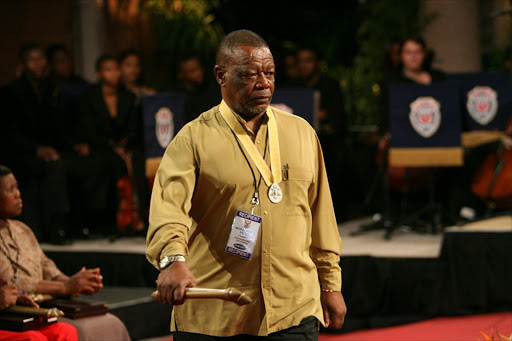 The University of Johannesburg (UJ) is to bestow an honorary doctoral degree on renowned liberation poet and novelist‚ Prof Mongane Wally Serote‚ on Monday in acknowledgment of his indomitable contributions to poetry‚ literature and philosophy in South Africa.

Serote has lectured at universities abroad and in South Africa and currently leads UJ’s postgraduate students in a project to document Indigenous Knowledge Systems at the African Centre for Epistemology and Philosophy of Science (ACEPS).

“Spending nine months in solitary confinement in an apartheid prison in 1969‚ and eighteen years in exile‚ Prof Serote’s commitment to ‘intervene and disrupt racism in all fields of human agency’ is evident in his widely-celebrated contribution to the literature and poetry of black identity and resistance‚” said Alex Broadbent‚ a Professor of Philosophy and the Executive Dean of the Faculty of Humanities at UJ.

“Mongane Serote is a true African intellectual in the tradition of the African philosophic sage: a profoundly wise person. He is the embodiment of philosophy as the love of wisdom‚ in the context of both traditional and modern Africa.

“His extensive contributions to the promotion of authentic African cultural expression and his sought-after expertise on Indigenous Knowledge Systems for re-building our society‚ are based on his broad experiential knowledge‚ participant observation‚ decades of organisational involvement and service‚ and deep intellectual reflection‚” Broadbent added.

One of South Africa’s best-known poets and novelists‚ Serote was born in Sophiatown in 1944. He attended primary school in Alexandra Township outside Johannesburg and high school in Lesotho and Soweto.

Detained under the Terrorism Act in 1969‚ he was released nine months later without being charged. He worked in advertising and studied fine art at Columbia University‚ graduating with an MFA in 1977. He moved to Botswana in 1979‚ where he co-founded the Medu Arts Ensemble‚ and to London in 1986‚ where he held a position on the ANC cultural desk. He returned to South Africa in the early 1990s.

His novel To Every Birth Its Blood (1981) deals with the 1976 Soweto uprising and its dramatic aftermath‚ and was met with critical acclaim.

In 2007‚ he was awarded The Order of Ikhamanga in Silver‚ for “excellent contribution to literature‚ with emphasis on poetry and for putting his artistic talents at the service of democracy in South Africa“.

”Prof Serote’s work deals with socially salient themes over several decades‚ and has achieved considerable influence. His work is often set for school learners. Moreover the message of his work is in line with UJ commitment to putting talent to work for the service of democratic society‚ as recognised in his 2007 award — The Order of Ikhamanga in Silver‚” concludes Prof Broadbent.

He also produced two collections of essays on South African culture and politics. His more recent works include the novels Gods of Our Time (1999)‚ Scatter the Ashes and Go (2002)‚ and Revelations (2011)‚ as well as the long poem History Is the Home Address (2004).