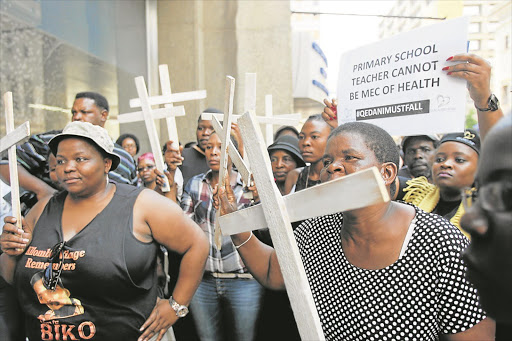 Family members of psychiatric patients who died earlier this year hold an ‘Esidimeni 37’ prayer vigil outside Gauteng Health MEC Qedani Mahlangu’s offices yesterday. The 37 patients died after being transferred from Life Esidimeni into the care of NGOs. Findings of the investigation into the tragedy would be released next month, health ombudsman Professor Malegapuru Makgoba said. Picture Creditc: Antonio Muchave. ©Sowetan

Gauteng MEC for Health Gwen Ramokgopa has revealed that the majority of the province’s healthcare facilities are unsafe.

This is according to a written reply from the MEC to questions in the Gauteng Legislature by DA Gauteng spokesman on health matters Jack Bloom.

According to Ramokgopa‚ health facilities inspected by the Department of Labour for biohazard and other safety issues in the last three years have failed to meet the required standards.

“The Department of Labour Inspectorate over the past three years has conducted various audits‚ inspections and investigations covering hazardous biological agents and complaints investigations at several of the Department’s facilities. Inspections [covered] much more than just biohazards or hazardous biological agents‚ also noise measurements and occupational hazards‚” said Ramokgopa.

She said: “All the audited facilities received either a non-compliance finding‚ such as a contravention and/or improvement compliance notice.”

However‚ Ramokgopa said that none of the audited facilities had deteriorated and “there has been improvement in general at all [affected] facilities based on the outcome of internal Departmental audits and inspections”.

Ramokgopa attributed the failures to “old poor buildings‚ infrastructure and equipment” and also “ever-increasing patients load‚ re-emerging of infectious diseases‚ burden of HIV and TB and general overload in our facilities“.

Bloom‚ in response‚ said that he was “appalled that not a single hospital in Gauteng was compliant in the critical area of worker and patient safety”.

“The hospitals that have not been inspected are also probably non-compliant in large measure. It is very worrying because hazardous biological agents are infectious and toxic… they cause allergic reactions such as hypersensitivity pneumonitis‚ allergic rhinitis‚ some types of asthma and organic dust toxic syndrome‚” he added.

Bloom made mention of the recent roof collapse at the Charlotte Maxeke Johannesburg Hospital and said that issues such as a huge maintenance backlog led to contraventions of the Occupational Health and Safety Act that increased risks such as these.

“I hope that the inspections are a wake-up call to the department to drastically improve safety conditions in our hospitals and clinics.”

Ramokgopa said that a number of steps had been taken and measures put in place‚ as a result‚ which included “continuous internal monitoring and evaluation of occupational health and safety programmes of our facilities by Occupational Hygienists employed in the Department”.

“Continuous awareness and training and induction programmes for existing staff‚ official induction for new staff and health and safety committee representatives and officers are being done as priority interventions and early warning detectors.”