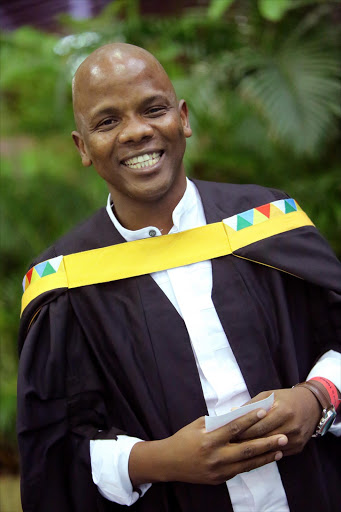 Former taxi driver Nkosinathi Mzolo graduated from the University of KwaZulu-Natal with a master’s in law.

If anyone had told Nkosinathi Mzolo that in 2017 he would be working towards a PhD, he would have called their bluff.

This is because back in 2005, Mzolo was working as a local taxi driver in Cato Ridge near Pietermaritzburg in KwaZulu-Natal, with no prospects of going to university.

Being raised by a single mother, after his father died when he was only three, it meant that he needed to fend for himself.

He started working in the taxi industry as a taxi conductor on weekends, when he was in Grade 11, just to survive. He earned R60 a week.

Mzolo, 32, said life was so hard for his family that when he was in Grade 10 he had dropped out of school.

"I was a bright kid and I always came top in class but I was tired of being ridiculed by other children for not having a uniform and that's why I decided to drop out," he said.

After two weeks his teachers went to his home and told him to return to school even though he did not have a uniform.

He persevered and in 2004 he passed matric with a bachelor's entry, but had no funds to further his studies.

"I went back to the taxi rank and worked as a conductor and later obtained a driver's licence and then I started driving taxis full time," Mzolo said.

But his luck changed in 2006 when his cousin, who got funding to study at the Durban University of Technology (DUT), lied to his parents that he did not get it and asked for money to register.

"I used what was supposed to be my cousin's registration money to register to study civil engineering at DUT and later got funding and life seemed to be looking up for me," he said.

However, in June of that year, he had to drop out because he could not raise the R800 the financial aid needed as a family contribution.

"I went to live with one of my brothers in Clermont and went back to driving taxis again," he said.

But he had tasted success and did not want to end up being a taxi driver forever.

Mzolo approached his high school teacher and asked for financial assistance to go back to university.

His teacher gave him R2500 to register for a Bachelor of Arts degree at the University of KwaZulu-Natal in 2007.

He got financial aid that not only paid for his studies but for food, books and accommodation. Life was good again and finally he completed his degree in 2012.

He registered for an LLB and graduated in 2014, after which he immediately enrolled for a master's in law which he graduated in early this month.

"My journey has taught me that your situation should not dictate your destiny but instead it should motivate you to become a stronger and better person," he said.

Today, Mzolo is a public law lecturer at Varsity College and is working on registering for his PhD in June.