DA to march against state capture in Limpopo 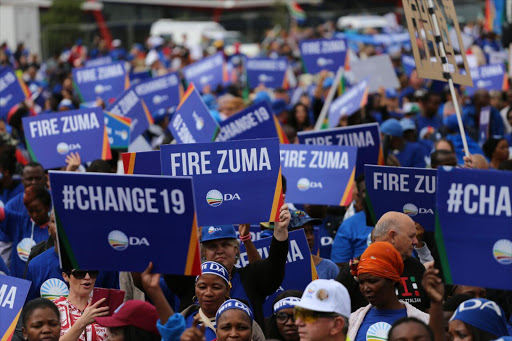 DA members getting ready to march in Johannesburg CBD

The Democratic Alliance will on Tuesday lead a march against state capture in Limpopo.

DA leader Mmusi Maimane will head the protest‚ along with the Economic Freedom Fighters‚ the Congress of the People and the United Democratic Movement‚ which will make its way to the provincial treasury.

“Jacob Zuma and the ANC have normalised the abuse of the people’s money and institutions for self-benefit‚ while neglecting their duty to create jobs and build a better South Africa. There is no better case study than the province of Limpopo — corrupted to the point of near bankruptcy‚ and economically stagnant‚” the party said in a statement.

Since President Jacob Zuma’s cabinet reshuffle last month‚ there has been nationwide protests aimed at intensifying the call for him to step down.

Zuma reshuffled the cabinet in March‚ leaving even members of the tripartite alliance unhappy and calling on him to step down.

While Zuma has said the marches were driven by racism‚ his deputy Cyril Ramaphosa said this weekend that leaders must listen to protesters.