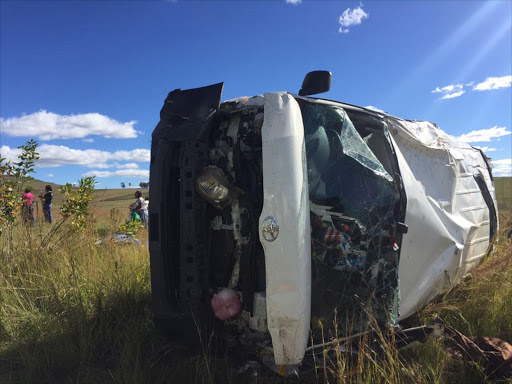 Three people were killed and about 35 others injured on Monday afternoon when two taxis collided on the N3 freeway in Mooi River‚ KwaZulu-Natal‚ paramedics said.

ER24 spokesman Russel Meiring said it was evident that both vehicles had rolled after they collided.

“ER24 paramedics‚ along with several other services‚ arrived on the scene and found both vehicles on the side of the road. Both the vehicles had sustained a large amount of damage in the collision.

“Upon closer inspection‚ paramedics found the bodies of a woman and two men on the scene. One of the men was found lying beneath the overturned vehicle.

“Unfortunately‚ all three patients had already succumbed to their multiple injuries. Nothing could be done for them and they were declared dead on the scene.

“Approximately 35 other patients were found on the scene. Paramedics assessed the patients and found that their injuries ranged from minor to moderate‚” Meiring said.

Paramedics treated the injured and ferried them to various facilities for further treatment‚ he said.

“The cause of the collision is not yet known but local authorities were on scene for further investigations. Traffic was heavily affected due to the collision.”