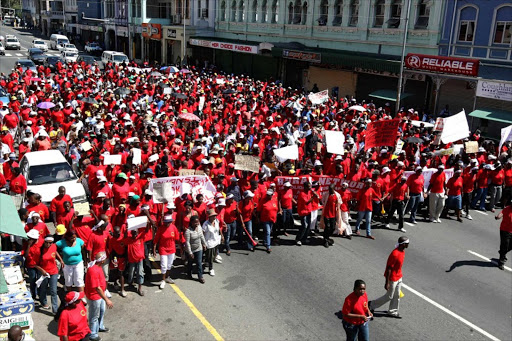 Abahlali baseMjondolo‚ a shack dwellers movement whose actions have often brought them into open conflict with the ANC‚ are on a collision course with the ruling party over the formation of a “vigilante group“.

Abahlali have accused two ANC councillors in Inanda‚ north of Durban‚ of forming A group known as “Qina uMhlali” to intimidate their members. They have also accused the group of usurping their slogan “Qina uMhlali.” The phrase translates to “be brave‚ citizen“.

“Witnesses say that the group was mainly made up of men armed with all sorts of weapons. These weapons included spears‚ bush knives‚ pangas and guns‚” said Nyoni.

Abahlali claimed that there was no democratic process leading up to the formation of the group‚ which the councillors said will fight crime in their respective wards.

“It was simply announced by the two councillors. They have effectively set up an armed militia‚” said Nyoni‚ adding that the area commissioner had told them the police did not recognise the group.

Phohlo denied that the group had been started by him and Zulu‚ but that it was started by the community to fight crime in the area.

“We were invited as councillors. Anything that can help in the fight against the crime we can’t oppose as long as it is legal and supported by the police.

“It is legal because we can’t work with a group that is not legal as public representatives. Crime is too much in Inanda and you can’t avoid things like these‚” he said.

He added that the group was aimed at dealing with rampant crime.

“Those guys are dealing with crime. Anything that fights crime and if it is recognised by the police we support it.

We only have a problem if it is not recognised by the police‚” said Phohlo.

KwaZulu-Natal police spokeswoman Colonel Thembeka Mbhele said she could not comment on Qina uMhlali until she had established all the facts.