WATCH: Man gets off flight after alleged racist altercation 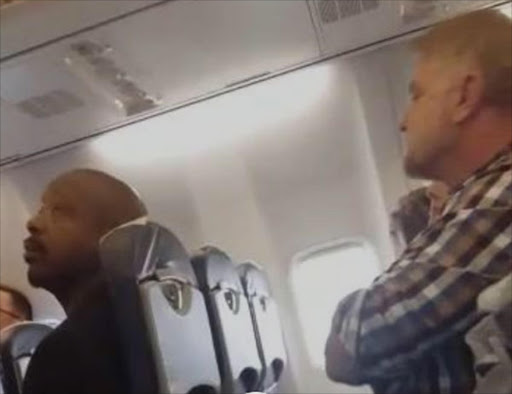 Flying off the handle on an airplane can cost you – in the case of one man it saw him ferry himself off his flight.

Last week Nthabi Sibanda and her husband were boarding a flight to Port Elizabeth‚ to attend a funeral‚ when they clashed with another passenger in an alleged racist incident.

In a video‚ shared on Twitter‚ the couple address the pilot with their complaint against the man.

It's my sister in law Nthabi Sibanda & her husbands voices u hear. They were racially abused on a flight on Friday to my moms funeral in PE https://t.co/BsY4RY6ONg

Jacqueline Rainers‚ a relative of the couple‚ retweeted the video identifying Sibanda and her husband.

“[He] called this gentleman an asshole and when we proceeded to say to him‚ ‘that’s unacceptable‚” he said to me‚ ‘you people are all the same’. What does that mean? Ask anybody here [what happened]‚” Sibanda’s husband is heard saying in the video.

When the pilot attempts to engage the allegedly racist man‚ Sibanda interrupts and tells him: “Sir‚ you are legally obligated to keep us safe. I do not feel safe going into the air with kind of aggression.”

The man denied threatening anyone on board but Sibanda rebutted saying‚ “You called him an asshole. You said I’ll bliksem you.”

The man finally stood up and said‚ “We will get out of the way‚ thank you very much. We will get off the plane‚” which was met with applause from the other passengers.

He then collected his luggage from the aircraft’s overhead compartment before disembarking.

Airline FlySafair confirmed the incident‚ which took place at OR Tambo International Airport in Johannesburg on Friday afternoon.

“Our flight captain was called to address passengers who were having an altercation in the cabin.

“The passenger and his wife left the aircraft of their own accord. After their luggage was removed from the hold‚ the aircraft departed normally‚” said airline spokesperson Kirby Gordon.

“It is the obligation of the captain of an aircraft to make the final call regarding his view on any potential threats on board the aircraft. In accordance with this‚ we fully support the captain for following Civil Aviation Safety procedures. Passenger and crew safety is‚ and will always remain our primary concern.”

Rainers commented on the video:

She said normally black pple wave it away but sometimes you have to take a stand https://t.co/epU2EAeptQ

FlySafair said it could not name the man accused of racism in the incident.