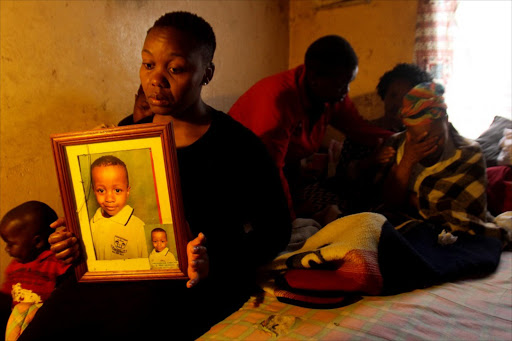 Tshidi holds a photo of Tinyiko Reckson Mongwe who was killed, while his mother, Rosina Mosiuoa, is comforted by her siblings at the back. Photo: SANDILE NDLOVU

Five-year-old Tinyiko Mongwe begged for mercy as he was being stabbed repeatedly on the neck by a 21-year-old man.

When the man finished stabbing him he picked him up and sucked blood from his neck.

Tinyiko's older siblings witnessed the brutal death of their younger brother. The siblings were playing on the street right opposite their house at Orlando East, Soweto, when the incident happened on Monday.

Distraught older sister, Nkhensani, 9, said they were playing football on the street when the man suddenly appeared. He tried to grab her but she ran away and then went for Tinyiko.

"He started hitting him and then had him on the ground where he stomped on him and started stabbing him. My brother kept on saying 'askies' (sorry) but he continued stabbing him until he died.

"He then picked him up and held him like a small baby and sucked blood from his neck," said a teary Nkhensani.

Mpho Mosiuoa, 17, Tinyiko's other sister, also witnessed the killing of her brother.

In the small bedroom at the family home yesterday, the siblings and their mother, wept uncontrollably as they recalled the brutal killing .

Their mother, Rosina Mosiuoa, said the last time she saw her only son was on Monday as she left for her domestic work job in the neighbourhood.

"I bathed and gave him food, kissed him goodbye and said I would see him later," she said. But when she saw her child later, he was lying in a pool of blood in the street covered in a shawl.

"I can't sleep, I can't eat and I keep on hoping that it is a lie that my son is dead. He was my only son and I loved him."

The man is in hospital under police guard after the community attacked him. Police spokesman Kay Makhubele said he has been charged with murder and will appear in court once he has recovered.

The man's home is a stone's throw away from Mongwes' residence.

His uncle, Moses Nkuna, said he behaved like a person who was possessed on the day.

He said three policemen failed to restrain him, and even after he was hit by a brick on the head by community members, he did not bleed.

"I managed to restrain him and he told me that he was thirsty and wanted to drink human blood," Nkuna said.

He said on Friday, the man had bought a chicken, slaughtered it and drank its blood.

Other people said he was a quiet person and called him "mfundisi" (pastor) because of his church affiliation.

'We were supposed to have killed him'

The Orlando East community says the man who allegedly killed the five-year-old boy must pray he does not get out of jail.

The residents, mostly women, were stopped on their tracks by community leaders while marching to the man's home.

The angry women said as mothers they were concerned for their children's safety. They also took issue with those who called the police.

"We were supposed to kill him," said a community member.

They also blamed his family, saying they knew the man was up to no good but did not report him to the police. "When he drank the blood of a chicken, why did the family not act? Were they waiting for someone's child to die?" asked another community member.

Others said they wanted to search the man's home to ascertain if there were no other bodies that were hidden inside.

Senye begged the community to support both families, especially Mongwe's family who does not even have money to bury the child.