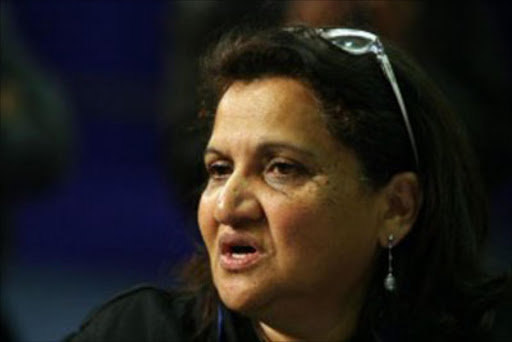 In a wide-ranging interview broadcast on Sunday night on ANN7 — the Gupta-aligned television news channel — Duarte implied that the ANC made some of the party’s biggest critics what they are today.

“Strangely enough‚ to me‚ and it might just be coincidental‚ that it is people who own big shares in mining companies who are the most vociferous.”

The presenter then interjected and said‚ “Sipho Pityana‚ for instance‚” before Duarte continued: “These are people whom the ANC had given many opportunities to‚ as ambassadors and so on‚ and I think that a more measured approach is required … instead of an approach that gives an ultimatum and that ultimatum is: this is our ANC and Jacob Zuma must go…

Sheryl Carolus and Fazel Randera are part of the group of 101 ANC veterans and stalwarts who have called on Zuma to resign.

Pityana‚ the chairman of mining giant Anglo Gold Ashanti‚ has launched a campaign called Save South Africa‚ which has become one of the president’s most outspoken critics.

Duarte also addressed criticism that ANC leaders were inaccessible‚ possibly a response to complaints from veterans that they had struggled to get a hearing from the current leadership to discuss their concerns.

“We have never turned anyone away … People like [Rivonia trialist Andrew] Mlangeni‚ there are a number of others I can mention. Comrade Mlangeni doesn’t work on a diary basis. His attitude is‚ I need to see the SG [secretary general] now and if the SG is not here‚ I’ll see the DSG. If there’s anyone in my office‚ he says‚ would you please excuse yourself? I need to see the DSG. It happens. It’s fine. There’s no crisis about that. In fact‚ you know‚ he’s beloved‚ so‚ he does that‚” Duarte said.

“The point is that this is not a competition about who gets into whose office at what point in time. This is about mutual respect. When you need to come and tell people something‚ do so properly. I know that Sipho Pityana met the SG. I was outside in the corridor. I heard a lot of laughter coming out of that meeting. So I didn’t think it was a negative meeting. I heard loud laughter.”