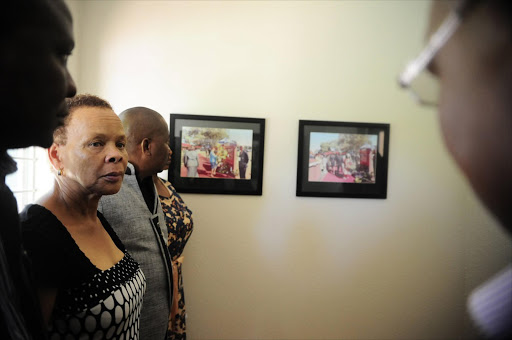 Chris Hani's widow Dimpho Hani and Mayor of Ekurhuleni Mzwandile Masina look at exhibited photos of Chris Hani at their home in Dawn Park, Boksburg. Hani was shot dead by Janusz Walus outside his house in 1993. The house which was bought back by the Ekurhuleni Municipality as part of its programme to preserve history and heritage will be turned into a museum. Photo Thulani Mbele. Photo Thulani Mbele.

Speaking at a wreath-laying ceremony commemorating the 24th anniversary of her husband’s assassination‚ Limpho said she had she attended a prayer session for the country and was accused of being part of a faction against Zuma.

“Comrades I am a member of the ANC and there is only one ANC‚” said Limpho.

She took a swipe at the media‚ quoting Malcolm X as having said media were known for misconstruing facts.

She also praised Zuma‚ saying he was a pillar of strength to her when her eldest daughter was addicted to cocaine.

Zuma‚ who led the wreath-laying ceremony‚ announced that Hani’s gravesite‚ in Boksburg on Johannesburg’s East Rand‚ had been declared a national heritage site.

The SACP as well as ANC members among others present at the Thomas Nkobi cemetery in Boksburg‚ welcomed Zuma chanting “Zuma-Zuma” as he was introduced.

Reverend Maphatsoe in his opening prayer said the ceremony was not to be tainted by political point-scoring‚ as requested by the president‚ and that the message was no longer “Save SA” but rather “Defend SA”.