How Rhodes Park case was solved 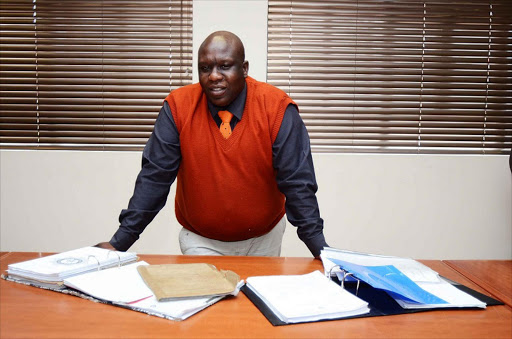 April 06 2017 Constable Lufhuno Brian Sono has worked on many prominant cases and has cleverly helped solve the Rhodespark Rape case, which happened in Kensington in 2015. Pic: Mduduzi Ndzingi. © Sowetan.

It took old-fashioned detective work and a bit of curiosity from Constable Lufhuno Sono to crack the Rhodes Park murder case.

The Yeoville-based police detective went beyond the call of duty to solve the horrific double murder and rape case.

Two years ago, two men were drowned and their wives raped in the park. Sono took it upon himself to find the killers, even though he was not assigned to the case.

The murder happened close to his home and he was determined to make the area safe for his domestic worker.

It was October 2015 when a group gang-raped Siphokazi Tyeke and Jabu Mbatha, shortly after their naked partners - Sizwe Tyeke and Zukisa Kela, whose hands were tied behind their backs - were driven into the dam at Rhodes Park.

Sono said he began asking questions around the Kesington neighbourhood, where he was born and raised.

His familiarity with the area helped him crack the case .

"A few days [after the killings] I got a call from a concerned resident near the park whose surveillance camera recorded the incident. This was a breakthrough for me because I had something concrete to work on, even though the video quality was poor.

"I continued asking questions about the eight men on the video and Thabo Nkala was the first person to be identified.

"That bolstered my quest to establish what really happened because it was impossible for two people to drown at the same time," he said.

Sono said he then located Nkala's residence at Mnyamandau (Dark place) in Yeoville.

"I drove day and night looking for Nkala without success. Then I received a call from a community member who had spotted Nkala in the Yeoville area and he was arrested," said Sono.

He told Sowetan Nkala confessed to robbing the women, but denied killing their husbands.

It was only after Nkala's arrest that Sono was formally assigned to the case and he worked together with Warrant Officer Bruce van der Schyff from Cleveland police station.

"The incident was reported in the media and more information started to come out about the outstanding men.

"Through the help of community members I arrested the second man, Admore Ndlovu, known as Jeje, near Joubert Park in the Joburg CBD. His confession corroborated Nkala's . However, both men said Mduduzi Mathibela was the one who killed Tyeke and Kela," he said.

Mathibela was then arrested and detained at Brooklyn police station.

Van der Schyff said: "I put my heart and soul in the case. We prayed to God to lead us because the world was watching and needed answers. We recorded 3000 hours overtime from October to December."

The hard work behind a successful conviction

After securing four life terms for each of the three men convicted of the Rhodes Park double murders and rapes, South Gauteng High Court Advocate Monde Mnqophiso Mbaqa is ready for another challenge.

Mbaqa, 36, who only started working as a junior advocate in the high court in December 2014, said the case was the biggest he has worked on.

"When I found out the amount of media attention it had drawn, I had doubts and wondered if, as a junior advocate, I was qualified enough to work on the case.

He said he had to meet with survivors Siphokazi Tyeke and Jabu Mbatha who were gang raped by a group of men who attacked them while they were taking an early evening stroll on October 17 2015.

Their partners, Sizwe Tyeke and Zukisa Kela, were stripped, had their hands tied and were forced into the dam in in Kensington, Johannesburg.

"The first consultation with the victims was a disaster. The event was still very new and they were crying a lot and were traumatised.

"[Much later] they were able to open up to me. Working on a case of this magnitude has been tiring. It required a lot of work, determination and consultation. We were working with complicated evidence," he said.

Mbaqa, who was born and raised in Embekweni, a small town 50 kilometres from Cape Town, started his training with the National Prosecuting Authority shortly after graduating with a bachelor of law degree from the University of the Western Cape in March 2003.

He started training at Athlone Magistrate's Court then completed the last month at the Bellville court.

Mbaqa was then employed full time and taken to the Somerset West court.

In November 2010, he got a job as a regional prosecutor in the Potchefstroom Magistrate's Court but a few years later he wanted a more challenging role and he applied to become a state advocate.

"My future plan is to become a senior advocate," he said.