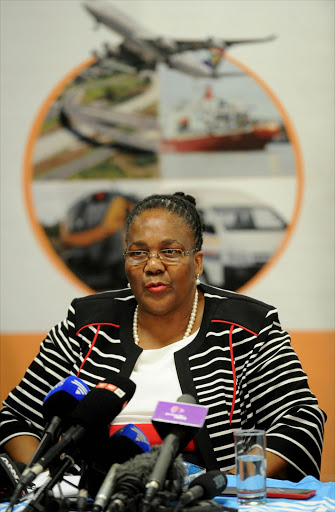 Dipuo Peters‚ the transport minister who lost her job in the recent Cabinet reshuffle‚ has resigned as a member of parliament for the African National Congress.

Peters took to Facebook to announce her resignation‚ which is effective from March 31.

She said she bowed out with her integrity intact.

“I never embarrassed God‚ my family and the movement as well as you my beloved fellow country men and women.

“It is true we are deployed by the ANC in parliament/legislatures and serve in the executive on the invitation of the President. Thank you ANC and the president for affording me a rare opportunity amongst many to contribute to advancing the mandate of the organisation.”

ANC Chief Whip Jackson Mthembu described Peters as a wonderful person‚ whose service to the national democratic revolution was exemplary.

“We wish her well in her future endeavours‚ whatever they may be‚” he said.

Mthembu said Peters had served the movement well from both a provincial to a national level.

“We truly value her contribution to making our democracy into what it is today.”

In her post‚ Peters said it had been an honour to serve the party in various positions over 24 years.

“I thank God‚ my family‚ the glorious people’s movement the ANC‚ the teams I worked with for a period of almost 24yrs and the people of South Africa in particular the Northern Cape‚ Kimberley and Galeshewe for the honour to serve‚” she wrote. “I am honoured and humbled for the confidence and trust with such a huge mandate and responsibility.”

Just before her departure in Thursday night’s controversial midnight Cabinet reshuffle‚ Peters had sacked the board of the Passenger Rail Agency of SA (Prasa) and four board members at the Airports Company SA (Acsa).

Her successor as Transport Minister‚ Joe Maswanganyi‚ pledged to ensure that billions of rand in infrastructure spend are used for the purposes of empowerment.

Maswanganyi previously served on the parliamentary portfolio committee on transport. He is a former secondary school teacher and long-standing member of the Limpopo provincial legislature.