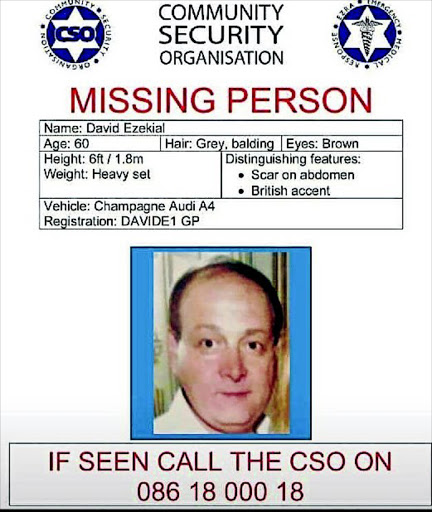 The murder of a Johannesburg chef was captured on CCTV footage as it occurred just outside Emperors Palace in Ekurhuleni.

The murder of a Johannesburg chef was captured on CCTV footage as it occurred just outside Emperors Palace in Ekurhuleni.

According to a source close to the case, David Ezekiel, 60, was shot moments after exiting the casino where he had drinks with his alleged killers on February 16.

The source said the footage led to the arrest of a couple last week who have been charged with Ezekiel's murder.

However, police spokesman Colonel Lungelo Dlamini would not comment on the footage yesterday.

He said any information regarding the CCTV footage formed part of the investigation and might form part of evidence. "Therefore I may not comment about it," Dlamini said.

Emperors Palace could not be reached for comment yesterday.

The source said the couple, Antonio Kristen, 22, and Blaina Sunken, 28, were arrested and appeared in the Johannesburg Magistrate's Court on Friday, on kidnapping and murder charges .

Dlamini confirmed the arrest of the two.

Another source at the police station said Ezekiel's body was burnt beyond recognition. He was found a day after he was killed, in an open field in Actonville, near Benoni, in February.

The first source alleged that the couple lured Ezekiel into believing they were going to offer him a tracking device for his car .

"The couple allegedly drove in convoy with Ezekiel in their vehicle from his home in Observatory to Emperor's Palace for drinks while his car [was] left in Kew outside Alexandra for fitment. Immediately after driving out of Emperors Palace at 8pm one of the suspects pulled out a firearm and shot Ezekiel in the head. They allegedly drove around with his body in the passenger seat to Actonville," said the source.

He alleged that after the murder, Kristen dropped Sunken in Kew, where the fitment was supposedly taking place, and drove off in Ezekiel's car.

"After that he allegedly went to a local garage to purchase four litres of petrol and several tyres to burn the body at a nearby soccer field," the source said.

Dlamini said: "[The two] were remanded in custody until the 5th for a bail application. The vehicle was recovered on 24 March 2017. A murder and kidnapping case is under investigation at Yeoville police station."

London-born Ezekiel moved to SA 35 years ago. He was an experienced chef who worked for several Jewish welfare organisations in Johannesburg.