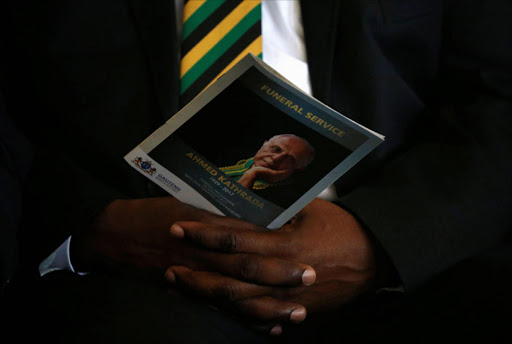 A mourner holds a programme bearing the face of Ahmed Kathrada during his funeral at the Westpark Cemetery in Johannesburg. REUTERS/Siphiwe Sibeko

The SACP in Gauteng and the Ahmed Kathrada Foundation will go ahead with a memorial service for Ahmed Kathrada on Saturday despite President Jacob Zuma cancelling the event.

Earlier today Zuma cancelled the memorial with giving any reasons.

“The SACP and the Ahmed Kathrada Foundation were looking forward to attending the government memorial service‚ which was planned to be held at the University of Johannesburg’s Soweto Campus‚ but was cancelled at the eleventh hour.”

The SACP and the foundation said that “if the memorial service is not held tomorrow‚ it may perhaps never be held”.