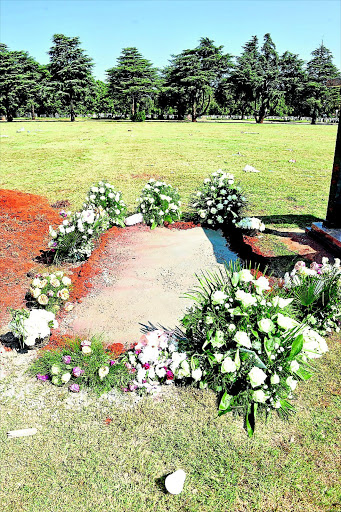 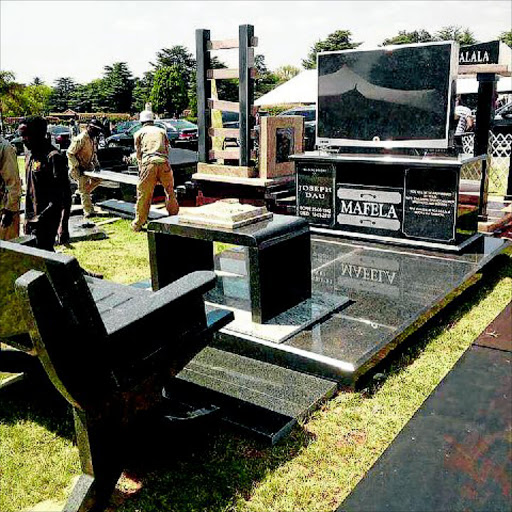 Fans were shocked to find Joe Mafela's tombstone missing from his gravesite at Westpark Cemetery in Johannesburg yesterday.

Instead, they were greeted by a slab of concrete lined by bouquets of flowers and not the flashy marble unveiled on Wednesday afternoon. Security guards at the cemetery said more than 50 people, both black and white, came to see the tombstone.

A police officer who did not want to be named said he had decided to come and see for himself after seeing a picture of the tombstone on social media.

But the memorial has not been stolen. It was taken away by the manufacturers, Bataung Memorial Tombstones, a few hours after Mafela's burial. Social media went abuzz with pictures of the outlandish tombstone on Wednesday.

Even though an unveiling ceremony was performed at his gravesite, a family representative said the tombstone was never placed on his grave. It was taken away by the manufacturers with the family's permission for a few days.

The memorial is a replica of a TV room, complete with a plasma TV, stand, couch, coffee table, decoder and a remote.

Mafela's son Jimmy said the memorial would be put back on Mafela's grave permanently at a later stage.

"No one at home has a problem with it being removed for now. We are doing things our way. They brought it to the cemetery yesterday so we could see it as some of us had not seen it before," he said.

"It was designed by Bataung CEO Lebohang Khitsane and is a gift to the family because Ntate Joe had been in the industry for a very long time. So it was a fitting gift," Mametse said.

He refused to say how much it was worth, save to say "it's very expensive".

But traditionalists believe removing the tombstone is an abomination in African culture. Phephisile Maseko, national coordinator of the Traditional Healers Organisation, said it was against African tradition to present valuable goods on a grave and then take them away later. "In our tradition you don't remove anything from a cemetery. Once you take something to the graveyard it means you have left it for the dead and that it's theirs now."