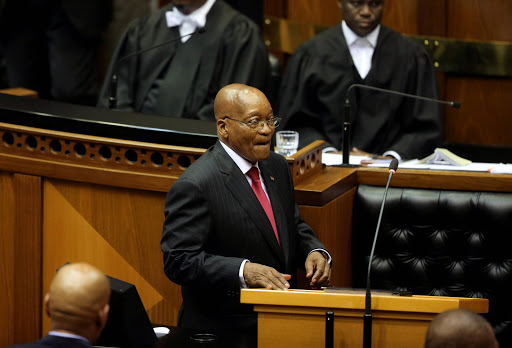 President Jacob Zuma delivers his State of the Nation Address (SONA) to a joint sitting of the National Assembly and the National Council of Provinces in Cape Town, South Africa February 9, 2017. REUTERS/Sumaya Hisham

President Jacob Zuma’s plan to boot out Finance Minister Pravin Gordhan‚ based on what is claimed to be a damning intelligence report‚ and replace him with former Eskom CEO Brian Molefe‚ was rejected by the SACP and half of the top six ANC officials.

Details have emerged of how Zuma went to the two meetings on Monday armed with an intelligence report believed to contain claims that Gordhan and his deputy‚ Mcebisi Jonas‚ had scheduled meetings with people who wanted to overthrow his government.

SACP deputy general secretary Solly Mapaila said a delegation of SACP office bearers told Zuma the party did not agree with his plans to remove both Gordhan and Jonas. Sources said Zuma met the same opposition when he tabled the matter before the party’s top six officials on the same day.

This could explain why Zuma has delayed announcing changes to his cabinet. Until late last night all eyes were on the Union Buildings as Zuma held a late meeting with his cabinet. Speculation was rife that Zuma might announce the changes after the meeting.

The president is under pressure from his camp to remove Gordhan to show he is still in charge and to prove he is serious about fighting “white monopoly capital”.

“For the record we did not agree. In fact we opposed it … we opposed [the planned reshuffle] on record.”

He said his decision to speak out was not a violation of the tripartite alliance protocol‚ but was to counter an impression that had been created‚ through the leaks‚ that the SACP had supported Gordhan’s removal.

“If the president wants to act he must not use us. We hold comrade Pravin and comrade Mcebisi in high regard.

“I believe comrade Pravin and Mcebisi Jonas are good comrades of the movement. I don’t believe these comrades can sell [out] the country. That is my view.”

Mapaila revealed that the SACP delegation told Zuma to “give Pravin the benefit of the doubt” and not act on a report compiled by a “rogue” intelligence unit.

Mapaila said Zuma had told them that the report said “these comrades may not be acting in the interests of this country”.

“We said what about the ministers who travel up and down to Dubai …why don’t you give him the benefit of the doubt.”

Zuma also struggled to convince the ANC top six during a meeting on Monday‚ sources said.

Other sources revealed that the report‚ the origin of which could not be verified‚ apparently states that Gordhan would have told bankers in London to stand with the Treasury in its fight against the Presidency and the Guptas.

State security spokesman Brian Dube “had no knowledge” of any intelligence report on Gordhan.

For some time now there has been some push-back by ANC leaders against Zuma’s intentions to fire Gordhan. But he and his backers have insisted that it is his prerogative to fire and appoint ministers.

Insiders said Zuma told the top six his relationship with Gordhan was irreparable and he could not trust the finance minister.

Gordhan attended the funeral of struggle veteran Ahmed Kathrada yesterday. He would not comment on his possible removal.

But he became emotional when he was saluted “irrespective of if you are a minister or not” by the Kathrada Foundation.