Rhodes Park survivors were 'wrecked' by murders and rape 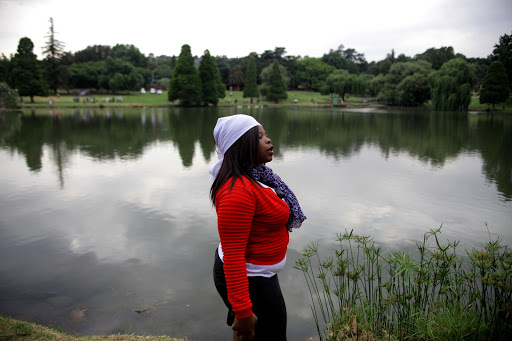 Jabu Mbatha at Rhodes Park in Kensington, where she was raped by a group of men who also drowned her fiancé and his friend in October last year. Photo: MOEKETSI MOTICOE

The Rhodes Park survivors were “wrecked” by the murders of their husbands and their gang rape.

This was the evidence given by Pfurisah Baloyi‚ supervisor of housemothers at Ikhaya Lethemba centre‚ in the South Gauteng High Court this morning.

“These two children (Siphokazi Tyeke and Jabu Mbatha) were so wrecked. It was as if they had gone underneath a running train‚” Baloyi said.

Yesterday‚ Judge Papi Mosopa convicted Thabo Nkala‚ Edmore Ndlovu and Mduduzi Mathibela on all charges against them – two counts of murder‚ two counts of rape and a count of robbery with aggravating circumstances.

They had pleaded not guilty to the charges‚ despite making separate confessions to the police. Mosopa admitted the confessions as evidence.

The group gang raped Tyeke and Mbatha‚ shortly after their naked partners – Sizwe Tyeke and Zukisa Kela‚ whose hands were tied to their backs‚ were driven into the dam at Rhodes Park on 17 October 2015.

Baloyi said the survivors were admitted to hospital several times because they were not coping.

“During their second time (in hospital)‚ they were walking like robots. On many occasions‚ they were not even aware that they had been hospitalised for close to two to three days‚” Baloyi said.