WATCH: 'Burglar' forced to dig his own grave‚ buried alive 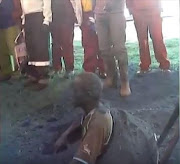 The video starts innocently enough. People are walking. They surround a suspected thief – buried up to his chest.

He’s been forced to dig his own grave. Cars drive past casually‚ a bystander bums a light for his cigarette. Thwack. The defenceless man is struck on the head with the back of a shovel.

This chilling scene played out on Monday‚ as angry residents of Dwarsloop village in Bushbuckridge‚ Mpumalanga‚ took the law into their own hands and threatened to bury a man alive.

Tumelo Dibakwane‚ who captured the moment in a cellphone video clip‚ said the police arrived just in the nick of time to rescue the man as the mob prepared to douse him with petrol and turn him into a human torch.

The same man was allegedly caught and beaten by residents‚ twice‚ in the past three months after they suspected him of breaking into homes.

“They caught him before but … this time they said that they were tired of beating him‚” Dibakwane told TMG Digital on Tuesday.

“Someone was suggesting they put petrol on him and burn him. If the police were late by five minutes‚ they had the petrol‚ someone managed to get petrol. The garage was just a few metres away‚” said Dibakwane.

The man is being treated for his injuries in hospital. Dibakwane said that he had spent an hour buried in the “grave” that he was forced to dig‚ while blows rained down.

At one stage in the video clip‚ a bystander picks up a pick-axe but he is hit instead on the head with a shovel.

Mpumalanga SAPS spokesman Sergeant Gerald Sedibe said: “There is no case that has been opened. The victim did not want to open a case. He was taken to hospital for medical treatment.”

Asked if police were aware of the claims that the man was a burglar‚ Sedibe said no one had come forward to open a case against him.

“The police condemn such behaviour where people take the law into their own hands. We urge people to follow the right procedure‚ should they suspect someone of being involved in criminal activity.”

WARNING FOOTAGE MAY BE UPSETTING TO VIEWERS