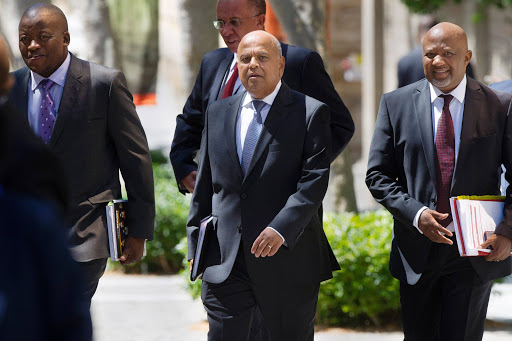 Gordhan arrived at OR Tambo International Airport on Tuesday morning and proceeded straight to Luthuli House.

He was seen entering the sixth floor — which hosts Mantashe’s office.

ANC spokesperson Zizi Kodwa said he could not comment because he was not at Luthuli House.

It is unclear whether Gordhan is due to meet with Zuma at all on Tuesday after the president ordered him to abort an important investor road show which was due to begin in London and continue to Boston and New York.

Zuma’s spokesperson Bongani Nqgulunga said he was not aware of such meeting.

The president spent Tuesday morning locked in a meeting with the Presidential Infrastructure Coordinating Committee (PICC).

The PICC includes 18 members of cabinet‚ chaired by the minister of public works Thulas Nxesi. Gordhan‚ as minister of finance‚ is not a member of the PICC.

On Monday night‚ a meeting of ANC officials with the SACP continued until late with sources saying Zuma is adamant he will axe Gordhan as finance minister.