Emotional Winnie‚ Zenani pay tribute to Kathrada‚ ‘my other father’ 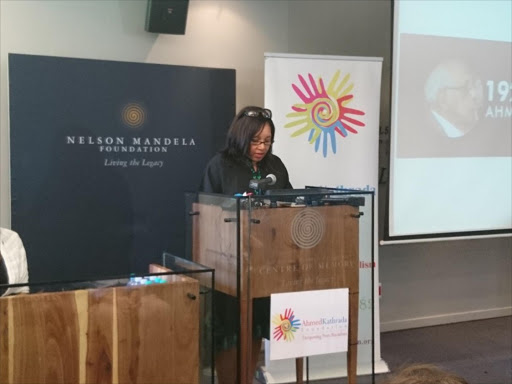 A distraught Zenani Mandela-Dlamini on Tuesday took to the podium at the Nelson Mandela Foundation to pay tribute to the late struggle veteran Ahmed Kathrada‚ who died earlier this morning.

Winnie Madikizela-Mandela also silently wept as she listened to her daughter battle through her prepared speech.

“He was my other father … He was one of my father’s closest friends‚” said Mandela-Dlamini‚ Madikizela-Mandela’s daughter with former president Nelson Mandela.

She spoke of how she would arrange for Kathrada to visit her father during his ailing days‚ reminiscing on how she found joy in seeing the two of them interacting.

Mandela-Dlamini called on South Africa to keep the legacy of both her father and Kathrada alive.

He had been ill for the last month and his condition deteriorated on Monday. Kathrada was taken in for surgery linked to blood clotting on the brain.

Apartheid stalwarts Sophie de Bruyn and George Bizos were among those present to commemorate Bizos.

They were joined by Gauteng Premier David Makhura and Barbara Creecy‚ among others.