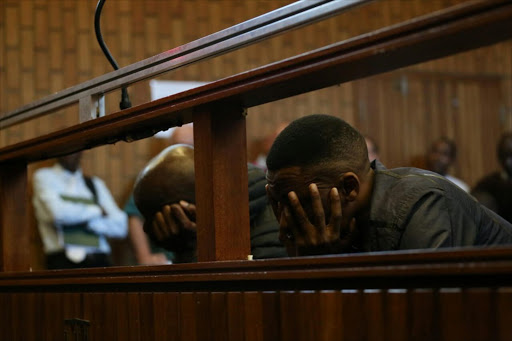 An eighth suspect has been arrested in connection with the daring cash heist at OR Tambo airport earlier this month.

The man made a brief appearance in the Kempton Park Magistrate’s court on Tuesday‚ however his official first appearance will only be on Wednesday.

That’s when arguments are set to be heard from attorneys for two other suspects‚ Prince Dube and Thando Sonqishe‚ who appeared on Tuesday for a formal bail application.

Both denied any involvement in the heist in affidavits submitted to the court in support of their bail applications.

The court on Tuesday heard evidence from the Hawks investigating officer against the men‚ revealing how cash positively linked to the heist was found in the home of Sonqishe’s girlfriend.

According to police the amount stolen during the heist was R20.7 million in South African rands‚ with no foreign currency involved.

The Hawks’ affidavit also detailed how Sonqishe jumped from a window onto the roof of a neighbour’s house when police arrived at his home to arrest him.

Sonqishe also has a number of previous convictions including armed robbery and reckless and negligent driving.

The affidavit further details how a case of armed robbery‚ where Sonqishe was arrested on the scene of the crime in Sandton in a hijacked vehicle in 2010‚ stalled after contact details of witnesses were altered on official court records.

This led to a junior prosecutor withdrawing the case. However police now plan to have that case reinstated.

Dube was meanwhile arrested in possession of a fake South African identity document‚ which he had allegedly used to open accounts and take out loans.

An SBV Security bulletproof vest and uniform was also found in the house in which he was arrested.

Police believe this house was used as a safe house where the vehicles used in the robbery were modified to resemble official SAPS vehicles.

The State confirmed he is now facing an additional charge of fraud.

Both suspects‚ the court heard‚ admitted their involvement to police who arrested them‚ which they are now denying in their official affidavits.

Sonqishe allegedly told police he was asked to provide the blue lights used on the vehicles‚ for which he was paid R1 million.

The matter was postponed until Wednesday at which time arguments from the defence attorneys will be heard‚ and the remaining four suspects will apply for bail.