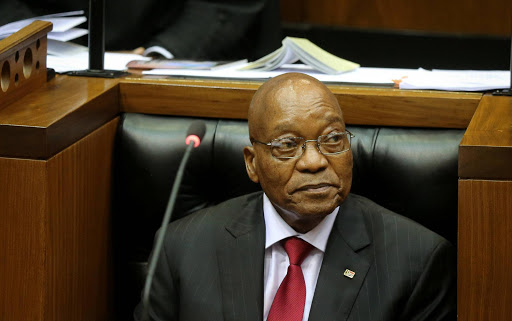 President Jacob Zuma during his State of the Nation Address (SONA) to a joint sitting of the National Assembly and the National Council of Provinces in Cape Town, South Africa. Picture Credit: REUTERS/Sumaya Hisham

The High Court in Pretoria has told President Jacob Zuma’s legal representatives that he is not formally part of the process and so cannot be added as an “interested party”.

Zuma made an 11th-hour application on Monday asking to be added in Finance Minister Pravin Gordhan’s application against Gupta-linked Oakbay Investments as an “interested party”.

Zuma‚ through an affidavit from state attorney Kgosi Lekabe‚ tackled Standard Bank’s explosive response to Gordhan’s application‚ filed in December 2016‚ in which it appealed for protection against executive interference in the bank.

Gauteng Judge President Dunstan Mlambo said on Tuesday that because Zuma was not a party in the matter‚ his legal team could only observe.

Matthew Chaskalson SC‚ for Zuma‚ told the court he would await instruction from his client on whether he should remain in court for the next two days as an observer.

He told the court Zuma did not want to join proceedings but wanted to be an interested party as Standard Bank cited him in the relief they were seeking from the court.

The relief sought by Standard Bank — in addition to Gordhan’s application for a declaratory order — was for the court to declare that “no member of the national executive of the government‚ including the president and all members of the Cabinet‚ acting of their own accord”‚ was empowered to “intervene in any manner whatsoever in any decision” by the banks to terminate banking relationships “with Oakbay Investments Propriety Limited and its associated entities”.

The High Court in Pretoria was packed with heavyweights of the legal fraternity representing the various parties in Gordhan’s application.

Gordhan will be represented by Jeremy Gauntlett and FB Pelser‚ while Wim Trengove‚ Kate Hofmeyer and Ndumiso Luthuli will appear for the Reserve Bank governor and the registrar of banks.

Advocates Cedric Puckrin and Francois van der Merwe are representing Oakbay Investments and some of the other Gupta-owned companies.

The four banks were also being represented by high-level senior counsel.