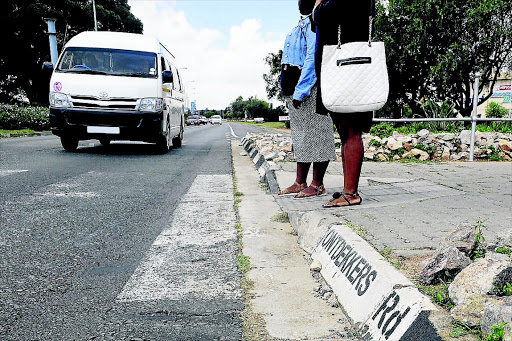 An Orange Farm woman has become the latest victim to speak out about her rape ordeal at the hands of a gun-toting White Toyota Quantum gang that has been terrorising women in parts of Gauteng.

The woman said she was on her way to work on Tuesday, March 14, when she boarded a taxi in Robertsham, Johannesburg. Inside the taxi, she was later allegedly confronted by three gun-wielding men.

"I honestly did not suspect a thing. I had just gotten off a taxi from Orange Farm because at that time, the driver refused to drive into Booysens.

"I stopped a taxi and there were two men and the driver. Along the way, the driver took the route to Southgate and I told him I was going to Booysens. The taxi stopped for a while and then they pulled out guns," she said.

She spoke to Sowetan yesterday in the wake of another victim of the same alleged gang telling of her attack at the weekend along Ontdekkers Road in Roodepoort.

The second woman was raped by three men during the four-hour ordeal after she and her son had boarded a taxi.

Her attackers withdrew money from her account and gave her R100 for transport to get home. The woman, 26, said she thought the worst would happen to her. "I thought I was going to die. At the time, I thought they were hijacking the taxi but after a while, I realised that they were a team.

"One of the men sat with me and then pushed me to the back seat where he made me lie on the floor and pointed the gun at me," she said.

The Orange Farm victim said during the one hour 30 minutes drive, she was unable to see where she was.

"They asked for my pin code and bank card which I handed to them. The taxi stopped but I did not know where we were.

"When the door opened again, I was beaten up and kicked. I thought it was because I had no money. We then drove off. We arrived in a bush in Dube [Soweto] where I was raped by one of them and then dumped," she said.

She was later helped by residents who called the police.

"I live in fear and do not trust men," she said.

Another unsuspecting victim was robbed of R15000 by three men in a similar Quantum in Soweto.

Her daily limit on her savings and cheque accounts is R15 000. The woman's husband said his wife had boarded a taxi from Mapetla to Jabulani in November 2015.

"It was payday and she had [money in her account]. The robbers made her lie down and asked for her bank card. They stopped somewhere and withdrew money.

"Fortunately, she was not raped. We tried opening a case but we were sent from one police station to another. We ended up giving up. The police failed us," said the husband.