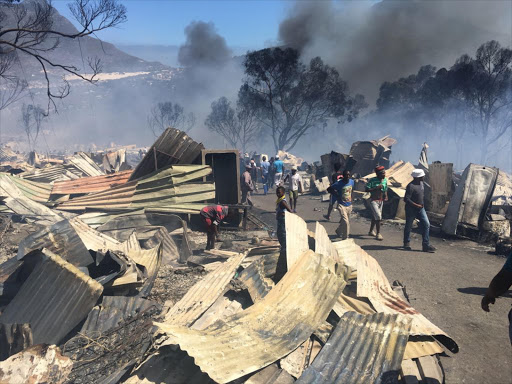 Reblocking has finally begun in the fire-ravaged settlement of Imizamo Yethu near Hout Bay‚ Cape Town.

This comes in the wake of residents in the informal settlement abiding by a plea from the city to tear down shacks that were rebuilt and which are standing in the way of reconfiguring the settlement.

Community leader‚ Samkelo Krweqe‚ said it had been a challenge to get buy-in from the residents‚ but confirmed that on Wednesday‚ “people are letting the shacks come down and are helping‚ and we expect to see the first house go up [on Thursday].”

City of Cape Town executive mayor Patricia de Lille said in a statement: “It is the first time in history that the City of Cape Town and the affected community have worked together on such a large scale.”

She added: “On Monday evening‚ the City hosted a community meeting with the residents of Madiba Square from Imizamo Yethu. The City was ready to begin the process of super-blocking and issuing the emergency housing kits on Monday morning‚ but due to the high number of structures already erected on the land‚ we were prevented from doing so.”

This comes 11 days after one of the biggest fires the country has ever seen displaced 15 000 residents and killed a further four‚ and it is hoped that the reblocking — which includes wider roads‚ user-friendly infrastructure and higher fire resistance — will prevent such tragedies in the future.

The fate of the settlement hung in the balance on Tuesday when the City said it would only start phase one of its reblocking project if all shacks‚ including those just put up after the fire‚ were torn down in the zone demarcated for phase one‚ Madiba Square.

According to De Lille‚ “During the community meeting on Monday night‚ the residents of Madiba Square who had already erected structures agreed to remove them so that we could commence with the super-blocking project today [Wednesday]”.

“A total of 15 families requested the City’s assistance to dismantle their structures so that they can receive emergency housing kits. These families signed a request in that regard.”

As a result‚ the Red Ants were contracted to assist the community with the dismantling.

However‚ says Krweqe‚ from Wednesday‚ locals will carry out the dismantling themselves under the Expanded Public Works Programme which will use residents from Imizamo Yethu itself.