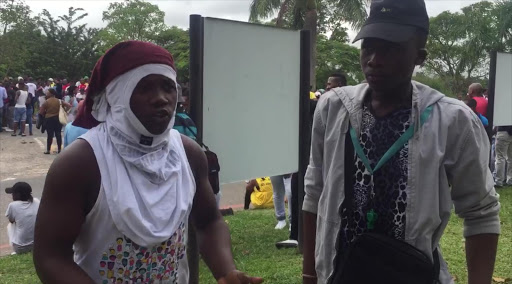 Protesting students at the University of KwaZulu-Natal’s Edgewood campus in Pinetown brought lectures to a halt on Monday‚ demanding funding from the National Student Financial Aid Scheme (NSFAS) for those who qualified.

The students are also demanding accommodation for some of their peers who are staying in hotels due to a lack of adequate accommodation.

Police were brought in to monitor the situation on campus‚ the university’s primary site for teacher education‚ after some angry students stoned passing vehicles.

He said they had submitted a memorandum to university management two weeks ago but “they responded via email without inviting us”.

“They told us that they are still engaging with NSFAS while the students are hungry.”

He said the reason for their protest was that there were students who had applied for funding from NSFAS and their applications had been accepted but the scheme had failed to give them money.

He said the SRC offices on campus had been flooded by students who were “crying daily that they did not have food” yet NSFAS had committed to funding deserving students.

“Now we’re holding [them] to their word. We have students who do not have accommodation at all. Some students are kept temporarily in other hotels. A hotel is not environmentally friendly when it comes to students and they won’t pass‚” he said.

Some members of the university management tried in vain to calm angry students who insisted that academic activities be cancelled for the day.

“On other matters we’re saying we can negotiate‚ but we are not prepared to go back to classes up until these issues are addressed. The institution does not care about students‚” said Dube.

UKZN did not immediately respond to queries.

SAPS spokeman Captain Nqobile Gwala said there was a protest by about 200 students on campus.

“They damaged the windows of a building at the campus and also threw stones and damaged a vehicle. A case of public violence has been opened for investigation at Pinetown SAPS.”

She said no arrests had been made. Police are monitoring the situation.