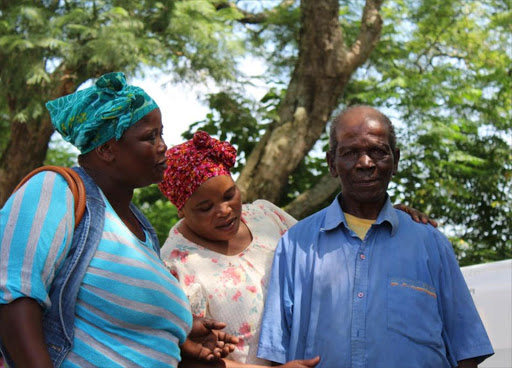 Myeza's daughters, Adolfina Mseleku and Delekile Gcaba with their father, Phelamandla Myeza, who was charged with the death of a 12-year-old he shot on Sunday. PICTURE: SOUTH COAST HERALD

The mother of the 12-year-old boy who was shot dead by his 87-year-old neighbour — who apparently mistook him for a monkey — believes the incident was a mistake.

Zandile Duma‚ 28‚ does not even believe that her neighbour Phelamandla Myeza should have been arrested for the death of her son Bongumusa — and said she was happy that Myeza was granted bail in the Umzinto Magistrate’s Court on Wednesday.

“I am happy because it was not my wish that he be in jail in the first place because I think it was a mistake. We have never had a problem with him‚” she said.

Myeza‚ a farmer in the Dabe village in Breamer on the KwaZulu-Natal South Coast‚ was granted R1000 bail after investigating officer‚ Detective Constable Nonhle Myende‚ testified that he was not a flight risk due to his age.

The court also heard that Myeza enjoyed a good relationship with the boy’s family‚ who had promised that he would not be in danger upon his release.

He is due to appear in court again on April 4.

But if it were for the boy’s mother‚ who lost another son‚ a two-year-old boy in 2010‚ Myeza would not even be facing a case.

“We don’t even want the case to continue‚ but that is up to the court to decide‚” she said.

The 12-year-old was shot on Sunday while picking guavas. He and another boy had been asked by another neighbour to chase away monkeys when tragedy struck.

Myeza‚ who had been told that monkeys were raiding his farm‚ took out his shotgun and went to investigate. When he noticed movement in a nearby guava tree‚ he fired a shot‚ killing the boy‚a Grade 6 pupil at the As-Salaam Combined School in the area.