BUDGET 2017: Gordhan upbeat despite talk that he could be on his way out 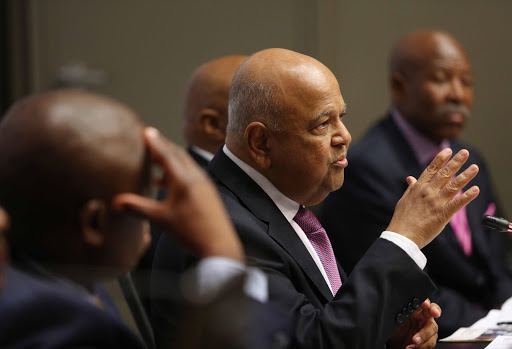 Although he seemed quite chipper‚ his deputy Mcebisi Jonas and treasury director general Lungisa Fuzile looked decidedly glum at the media conference.

Rumours have abounded over the past few weeks that Gorhan would be replaced by Brian Molefe‚ the former Eskom chief who left the power utility in streams of tears after his frequent visits to the Gupta-associated suburb of Saxonwold were revealed.

Gordhan’s budget of R1.56 trillion projects a shortfall of R149 billion (3.1% of GDP)‚ which the country would have to borrow.

A new tax bracket for the super-rich has also been created. Those with taxable income of R1.5 million per year will in future cough up 45% of their income to the state.

Gordhan said although global economic growth is slightly better than the preceding year at 3.4%‚ geo-political and economic uncertainties have increased.

South African growth is estimated to reach only 1.3% this year‚ which the finance minister admitted provides a major challenge to government and citizens.

“We need to radically transform our economy so that we can have a more diversified economy‚ with more jobs and inclusivity in ownership and participation‚” said Gordhan.

He signalled government’s intent on land reform by earmarking R30 billion for it between now and 2019.

“Our financial situation is difficult‚ but we still produced a credible budget‚” Gordhan claimed.

He said South Africa needed to prioritise its spending better‚ and had to build the widest possible partnership to promote consensus and action on a programme for inclusive growth and transformation.